Smoked meat is just the start. 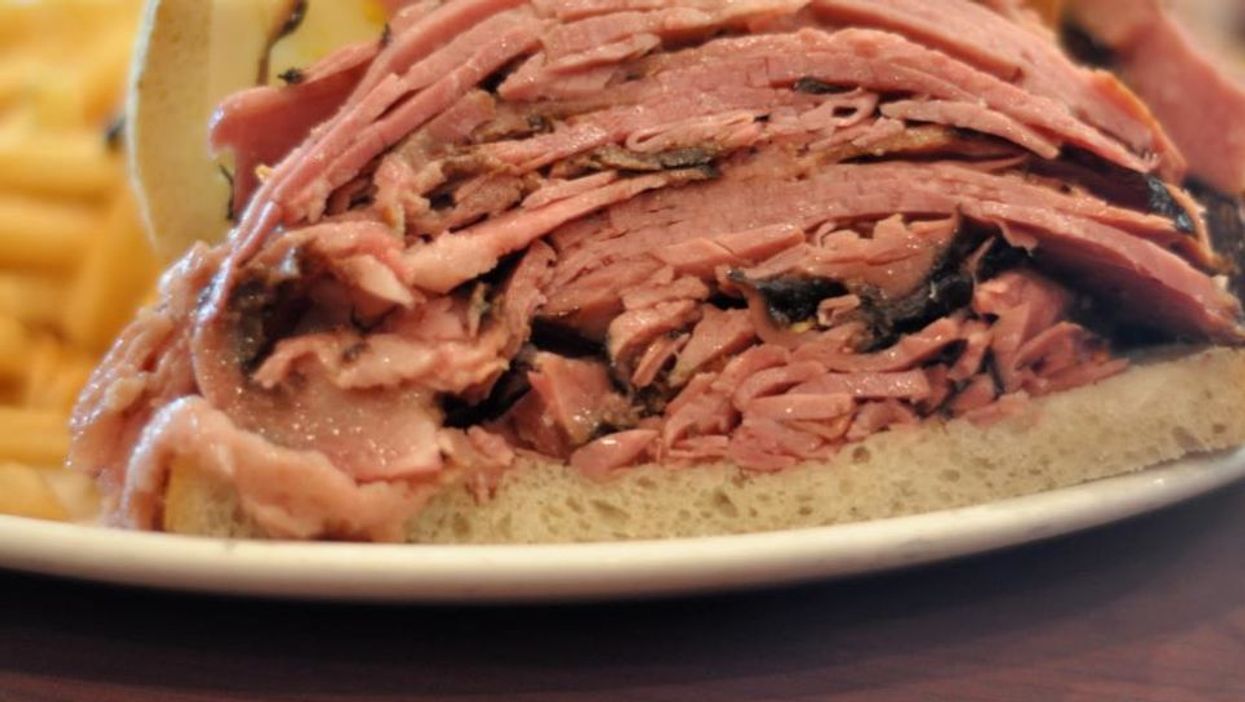 Apparently today is National Sandwich Day, and while we don't really know what makes November 3rd more sandwich-y than any other day of the year, we're not going to fight it because an excuse to mack on a sammie is quite welcome. Especially when you're in a city like Montreal, that has plenty of scrumptious sandwiches to choose from.

So to commemorate the food day (that seems a little unnecessary, in all honesty) we're going to give a run down of the city's best sandwiches you need to eat on National Sandwich Day, or any day, really. Read on, feast your eyes, and get hungry.

Marinated with passion fruit and brown sugar, then cooked for a full twelve hours, all inside a Venezuelan maize-dough arepa, the passion fruit pulled pork sandwich at Bocadillo's is a meaty religious experience. Don't be fooled by the flat-ish size of the arepa, because the corn-based bun is able to absorb all of the pork's sweet meaty juices incredibly well.

Throw some Venzualan cheese on the arepa to take things to the next level, if your taste buds can handle it. Oh, and pair the sandwich with yuca fries. Always yuca fries.

Surprised that Schwartz's isn't taking the mandatory smoked meat spot on this list? Well don't be, because I kinda hate Schwartz's and obviously this list is a little biased, but it's not like Rueben's sandwich-creation doesn't rightfully deserve their spot.

More than just a simple smoked meat sammie, Rueben's (the small underground deli on Sainte Catherine and McGill College, not that overly fancy one by Peel) adds even more meat, with an entire layer of chopped liver endowing the sandwich with a scrumptiously smooth richness. Be warned, though, this sandwich is only for the most carnivorous eaters.

Take the entire Boustan menu, throw it in a pita, and you have the "Creation" sandwich. Combining the deliciousness of the chicken, beef, and veggie sandwiches, the creation is more than the sum of its parts, with all the meat, veggies, and potatoes complimenting each other into one mess of tastiness.

And, as is Boustan tradition, expect tons of garlic mayo in the sandwich (technically it's a pita, yes, but we're not being picky and neither should you) which adds another layer of richness, but be sure to be wary of that post-Creation breath.

Technically, "bánh mì" isn't a sandwich, per se, it's really just a word used for baguette-style bread which then evolved into the go-to term for the sandwich itself. But enough on food history, all you need to know is that a bánh mì is a Vietnamese sandwich and Vua makes the best in the city.

For less than $5, you can get a warm, toasty, and incredibly filling sandwich filled with mayo, cilantro, pickled carrots, daikon, and your choice of meat. Vua offers a wide selection of sandwich flavours, from traditional Vietnamese to European-inspired styles, all of which are solid choices.

If you think you need meat to make a delicious BLT, then you've never had the pleasure of indulging in Aux Vivre's vegan-style bacon, lettuce, and tomato sandwich, which doesn't have any "real" bacon, of course. Subbing in coconut bacon for the classic pork variety, along with vegan mayo, Aux Vivre's vegan-version still tastes just like a classic BLT, and is free from all those cancer-causing carcinogens!

But don't get the idea that the vegan BLT is a basic "healthy" substitute, because the sandwich is solid even without the health benefits.

Who needs bread when you have donuts? No one, that's who, and praise be to Chez Boris for adding a little extra decadence to the realm of sandwiches. The resto-cafe's entire line of beignewiches are primo sammies, but when it comes to originality, we have to give it to the gravlax option.

Between two freshly made donuts, you'll fine homemade gravlax, organic cucumbers, and sour cream, which all adds up to a delicious flavour reminiscent of a latkes with lox plate.

Sometimes you just want a simple, down-to-Earth kind of sandwich, one that doesn't go crazy with the ingredients, or flavours, and is altogether comforting for your taste buds. La Chilenita's Churrasco is just that kind of sammie.

Don't think La Chilenita only does empanadas, because the bakery also has a mean sandwich game. The Churraso only has four ingredients (grilled steak, tomato, mayo, avocado) all of which blend together beautifully in their simplicity. And getting a steak-wich for little over $7 is a great deal in itself, making the Churrasco a delicious option that won't break the bank.

I am not even attempting to be a tad hyperbolic when I say that Patati Patata's Special Luc is hands-down the best breakfast sandwich in all of Montreal. Don't believe me? Go try it and see for yourself, because I guarantee your doubtful mouth will be silenced by the greasy breakfast perfection that is the Special Luc. Essentially a western omelette packed into a sandwich, the Special Luc is everything you want in a breakfast sandwich: simple, affordable, and altogether insanely delectable.

Boasting a wide array of tasty sandwiches, Omnivore makes it difficult to choose one that stands above the rest. For simplicity's sake, we're going with the Beirut Kafta, which features a beef kafta, hummus, onions, pickles, and cabbage. Boasting scrumptious middle eastern flavors, the Beirut may not end up being your favourite sandwich on Omnivore's menu, but it definitely has the widest appeal.

Regularly on special, the Hainan chicken sandwich from the much-loved Satay Brothers includes poached chicken, cucumbers, tomatoes, green onions, and some spicy sauce for good measure. Yes, the ingredients listed don't sound all that amazing, but there's a reason the Hainan keeps on returning to the Satay Brothers menu: people love it. You will too.

When it comes to sandwiches at TKRestobar, the Ramen Burger gets all the attention. Not that it isn't undeserved, because the Ramen Burger is crazy tasty, but the unsung star on TKRestobar's menuhas got to be the steamed pork bun.

A freshly made (and still doughy and warm) steamed bun, stuffed with melt-in-your-mouth slices of pork belly, coriander, peanuts, and pickled cucumbers adding some fresh crunch. Tying the sandwich together is a sweet hoison-style sauce. Best of all, the steamed pork bun is fairly small, so you can order a couple before your Ramen Burger and enjoy both in one meal.