42 Free Things You Gotta Do This June 2017 In Montreal 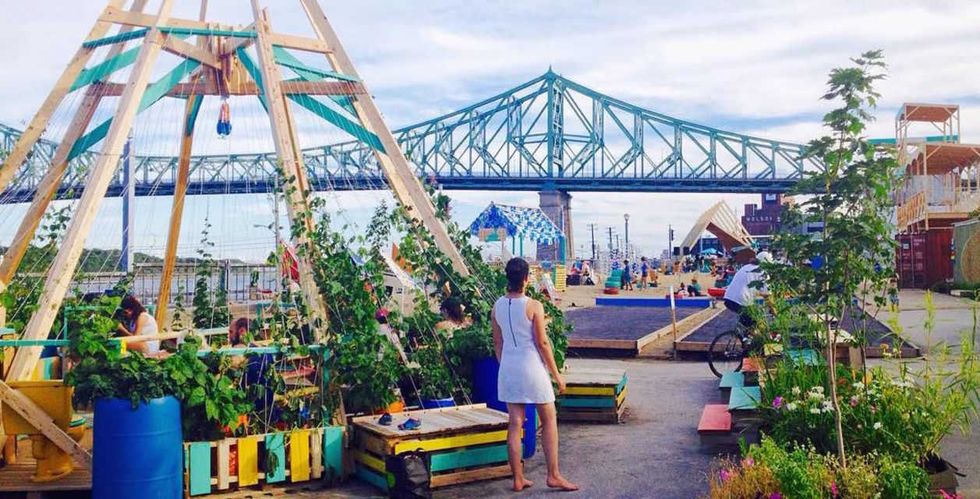 Guys, we did it! We made it! It's finally June, which means three things. One, we're officially six months into 2017; we actually made it through the first half of the year!

READ ALSO: 15 Things You Can Do In Montreal This June, July, and August In Montreal With Your Girlfriend

The second thing is that... it's finally, literally summer. I know it might seem like Mother Nature hasn't gotten the memo just yet, but trust, June is the first official month of summer and she'll shape up. She'll get the hint. She's got to. I, for one, cannot handle another day of sunshine/rain/sunshine/snow.

And by free things, I don't mean, like, chilling in a park with a bottle of wine and and a picnic basket. Although, I mean, that's kind of my personal favourite thing to do in the summer. Grass, sunshine, wine, and food? There's no bigger win in my book.

But I know you guys. I've been doing these free things lists for about two years at this point, and I've learned you guys want something a little extra.

Art exhibits, free museums, live music, and Fete Nationale (which is June 24, just in case for some reason you've forgotten) are all on the docket this month. And trust, June 2017 in Montreal looks like one seriously fun - seriously inexpensive! - time.

On June 1, head over to the Village au Pied-du-Courant for their massive opening party.

Then head down to the Plateau, for Mont-Royal Avenue's huge sidewalk sale, June 1 - 4.

Love food trucks? Then on June 2, get yourself to the Olympic Stadium, for the first First Friday food truck event of 2017.

If the literary world is your oyster, check out the free launch of RUFF HAUS Zine, going down June 2.

Or, if sidewalk sales are really your thing, head on out to the Promenade Ontario for their sidewalk sale, June 2- 5.

Then, take a chill pill on June 4, and head on out to the Village au Pied-du-Courant for their Doux Dimanche event, with free games and chill vibes.

That same day, get yourself to Montreal's Jardins Gamelin and celebrate the Fete Mondiale Du Jeu De Montreal.

History and art buffs, rejoice, and get down to Jardins Gamelin on June 6 for their BAnQ Aux Jardins outdoor event.

Is live music what you live for? Then, on June 7, head out to Divan Orange and check out the Young Critters Free Launch event.

If art is your whole life, then get down to the Boxotel June 8 - 18 for the Nasty Women exhibit.

Then head down to Promenade Wellington, for their huge sidewalk sale, June 8 - 11.

Science lovers, rejoice, and head on out to the Old Port of Montreal for the Eureka Festival, June 9 - 11.

Get yourself down to Crescent Street June 9 - 11, and bask in all the Montreal Grand Prix celebrations.

Or else, head down to Little Italy on June 10 - 12, and check out all the cool cars that'll be parked there for that same reason.

Love music? Who doesn't! On June 11, check out the FringeFolk 2017 live music fest in the Plateau.

If you're a comedy buff, then on June 12, you're going to need to check out Jardins Gamelin for their free outdoor comedy sketches.

That same day, get yourself to St. Laurent Street and enjoy some grilled meats at the huge BBQ Festival.

Then cap off the day at Place Des Festivals, for La Soiree Acadie Rock, as part of Montreal's FrancoFolies.

On June 15, after 5:30, head down to the Canadian Centre for Architecture and enjoy free admission.

That same day, head on out to the Galerie De L'Uqam, and check out an exhibit by Mexican artist Gilberto Esparza.

Need to improve your French speaking skills? On June 15, check out The Frenchies' openhouse french conversationalist event, at Kampai Garden.

Then head on out to Laval, for the massive Lebanese festival.

On June 16, get yourself to Brossard and whip yourself into shape with this super fun glow yoga class.

End the day by heading out to Sainte-Anne-De-Bellevue, for a free salsa class near the water.

Music lovers, rejoice, and head on out to Place Des Festivales on June 17 for the free Koriass, Love Supreme show as part of Montreal's FrancoFolies.

On June 18, head down to the Quartier Des Spectacles and check out the 21 Balancoires (musical swings) exhibit for the last time this year.

On the evening of June 21, and every Wednesday of the month, head on over to the McCord Museum and enjoy free admission.

Throughout the month, head down to Sainte-Catherine Street and enjoy the "rainbow balls" outdoor exhibit in the Gay Village, to celebrate the Village's 35th anniversary.

Architecture lover? Then check out The Shape Of Things To Come Habitat 67 design exhibit on June 22, at the Centre De Design de l'UQAM.

Then, on June 24, celebrate Quebec's Fete Nationale and check out Montreal's parade.

If museums are totally your thing, then head down to the Montreal Museum of Fine Arts on June 25 (AKA the last Sunday of the month) and check out the exhibits for free.

On June 27, get yourself to Lole Sainte-Catherine for a free Essential Tune-Up yoga workshop.

Then, on June 30, get back to Place Des Festivals for a free jazz concert, put on by Valaire.