7 Things Polite Canadians Should Absolutely Never Eat On The Bus

Don't be that guy. 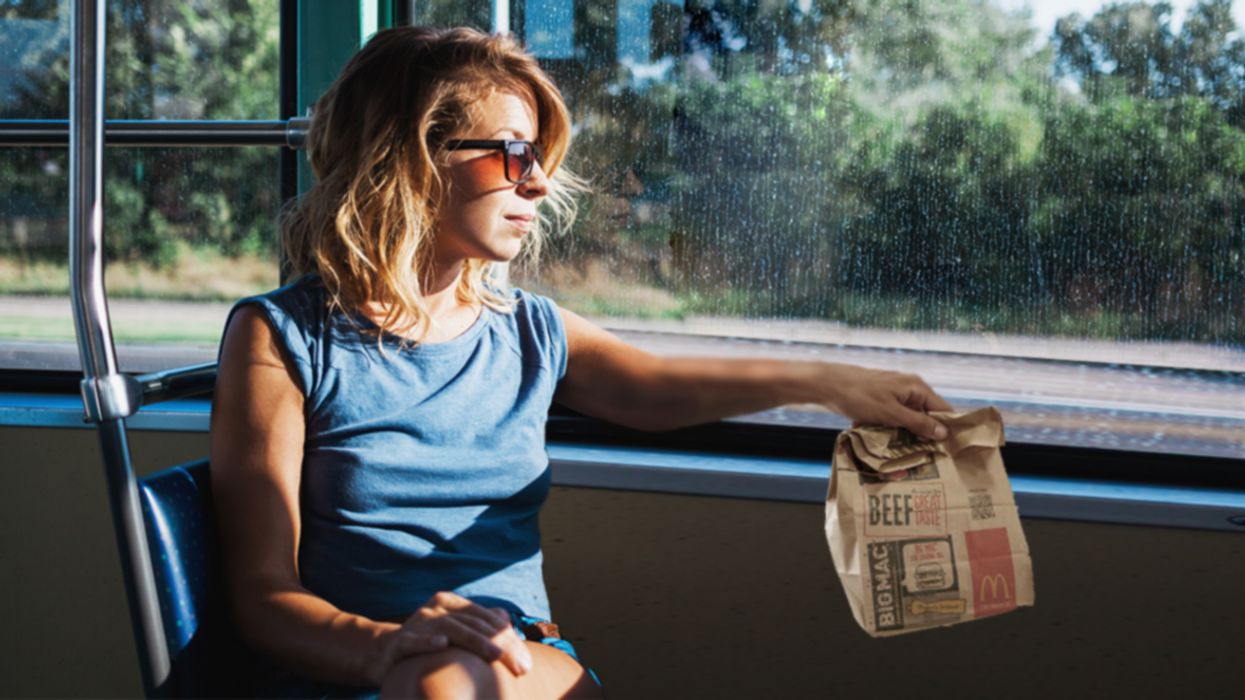 Good morning! Many of us are currently commuting right now, and that means being sardined into a small metal container with way too many other humans. Before I started taking the metro during rush hour, I never realised that I could physically be in contact with eight other bodies. The more you know.

Being sandwiched in a closed space for long periods of time, especially early in the morning, means that you probably have little patience for the whacky things people think they can get away with on the bus. I see you hitting your Juul, Brad, and now the whole bus smells like mango. Cool!

The worst part about taking transit early in the morning is the fact that everyone is eating breakfast. This means an assortment of weird smells, gross sounds and the high probability that someone is going to spill something on you. For those of you with "un manque de savoir-vivre," as my mom would say, this list is for you.

Here is a list of things you should NEVER eat on the bus.

How dare you. Now the smell is making me crave McDonald's, and that's not cool. Especially because I know that you're going to leave the greasy bag on a seat once you're done with it instead of taking it with you, and littering ain't cute.

I would have just said "eggs," but if you manage to bring any eggs other than the boiled kind on the bus I will probably be impressed enough to give it a pass. Eggs stink, and now the whole bus smells like fart.

READ ALSO: Frost Advisories In Effect For Three Provinces In Canada... And It's The Middle Of May

Anything That Requires Preparation

If I see you pulling out a ton of ingredients and prepare your meal on the bus, I'm going to be worried that at least one of your ten Tupperwares is going to tip over and spill all over my sneakers. Mix your salad at home, Susan. Side note: why would you have a salad for breakfast??

"Everything Bagel" From Tim Hortons

See the "McDonald's" reasoning. Don't make me crave what I cannot have, you villain.

If you had time to go and get yourself a fancy green juice (or, even worse, had the time to mix it yourself at home) you're way too put-together for how early it is and you're making me feel bad about my coffee-guzzling self who can barely keep both eyes open. Nama-stay off the bus before I slap that juice out of your hands.

I don't want to have to turn my headphones all the way up just to drown out the sound of your apple-crunching. When the bus is super packed, whatever you're eating is going to be right up against someone else's ear, so don't. Also, if I get apple-crunch-spray on me, we're going to have a serious problem.

Yoghurt (And Other Liquid Foods)

If you need a spoon to eat your breakfast, don't. The chance of spillage is way too high, none of us needs this right now.

Public transit is one of those places where you're forced up really close to other humans. Try to be on your best behaviour as you share a small space with many other people. I'm not telling you not to eat, I'm just asking you to think about what you're eating on the bus.

Not to mention the fact that buses are GROSS. Do you want your hands, which have just touched 74 people and the tripod, to then touch your food? Nah.