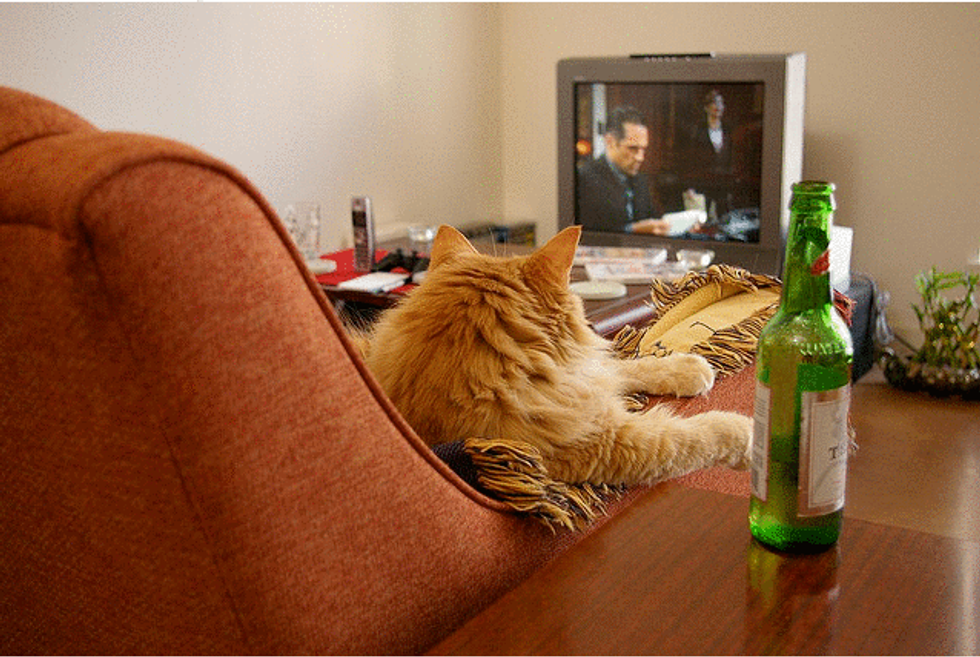 First off let's take a moment and remember a few of the great shows ending this year. 2013 sees the final episodes of Breaking Bad, 30 Rock, Dexter, Futurama (again) and The Office. This means it's time to find a new tv addiction. Here are 8 of the most promising new shows hitting this fall!

FOX'S army-themed comedy actually has a few good laughs in this short trailer, that bit about the panda at the end kills me and if the show is as consistently funny as this promo is, we could have something great here! Enlisted's premiere airs November 8th on FOX.

The genie from Aladdin and Buffy the Vampire Slayer are teaming up. That's right Robin Williams and Sarah Michelle Gellar play a father/daughter advertising duo. Now I'm just going to go ahead and say it, the show itself can be utter garbage and still succeed cause it's got ROBIN FUCKING WILLIAMS! The Crazy Ones debuts September 26 on CBS.

Okay, okay, hold on. J.J. Abrams, the director of the rebooted Star Trek films and the upcoming Star Wars films, is producing. Karl Urban (aka Dr. Bones McCoy from Star Trek reboot and Judge Dredd in the 2012 sci-fi film Dredd) is staring. It's in the year 2048, androids and future tech a plenty. And the special effects are legit? Goddamn this looks fantastic. FOX premieres this bad boy on November 4th.

Forget what you know about the American short story of the same name, it was probably pretty boring anyway. This is basically National Treasure with less Nicolas Cage and more time travelling Brits. Also, a headless time travelling (ghost?) with a machine gun!? SIGN ME UP! Airs September 16th on FOX.

This show had me sold at Andy Samberg making robot noises. That's right the SNL veteran is starring in a parody cop show alongside Terry Crews (from the Expendable films and the Old Spice commercials). Just saying, these shenanigans look hilarious, plus that Fred Armisen cameo makes me wonder if there'll be a slew of SNL cast members making appearances! You know what you'll be doing on September 17th (FOX).

Like a good drink, this show seems to have just the right amounts of funny, romance, and raunchiness. The voice over guy kinda pushes the trailer into cheesy territory ("Love will be served"? Really?), but that shpeel about black guys being right about big booties killed me, definitely worth checking out when it airs, which will be... sometime this fall! ABC seriously needs to release a date!

Marty McFly is BACK BABY! That's right, after YEARS of cameos, Michael J. Fox is a showrunner in a show named after him. The show revolves around Michael and him living his life and being there for his family whilst dealing with Parkinsons. Also, Betsy Brandt (aka Marie from Breaking Bad) plays Fox's wife, and might prove to be pretty hilarious herself! Absolutely something everyone has to check out the premiere on September 26th.

Lets be honest, Marvel films have been badass as of late. Iron Man, Thor, Captain America and of course the mega blockbuster The Avengers. But Agents of S.H.I.E.L.D. wants to show the bureaucratic side of the marvel universe. Cue Agent Coulson (remember that guy who died in The Avengers?) and his team of suits. It has a bit of an X-Files feel to it, and any self-respecting comic fan will know to check out the ABC premiere on September 24th.

Let us know what shows you're most looking forward to this fall in the comments section below!