It may all be over but relive it one last time.
Alex Melki 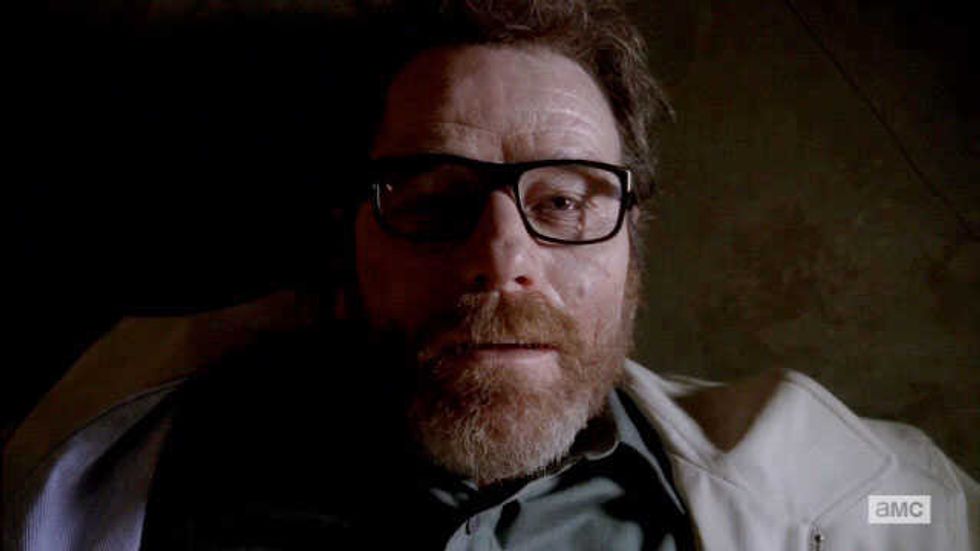 Breaking Bad's final episode aired yesterday and it did what many finales fail to do: it tied up virtually all loose ends.  For months fans had debated and discussed whom Walt  would use the ricin and the machine gun on, and the results did not disappoint. This was an episode for the fans.

First, Walter White is one hell of a lucky man. Proof right below.

Then right away, Walt settles his beef with Gretchen and Elliot Schwartz in one of the most well executed scenes in the show's history. And he did it in a way many did NOT see coming: without actually killing them.

His genius in coercing his former business partners into funnelling the $9.72 Million for Flynn is fantastic. But the follow-up with the "two best hit-men west of the Mississippi" turning out to be Badger and Skinny Pete with laser pointers was amazing. Definitely a scene for longtime fans.

And without skipping a beat, Walt picks up the ricin for a meet and greet. I can't  be the only one who didn't notice Heisenberg right away, sitting smack-dab in front of the camera as Todd joins Lydia at their usual meeting place. And neither did they as Walt, so out in the open, grabs a chair and sits next to them. It was almost comical.

Unbeknownst to her, Lydia's tea was sweat with ricin. Also, Todd is still creepy as fuck.

Skyler, who has come a long way since the "I fucked Ted" days, gets a call from Marie, warning her of Walt being back in town,whom the camera, panning to seconds later, reveals has been in her kitchen the whole time. Walt serves up Hank's burial site, says his final goodbyes to his wife and daughter, and finally admits that he did what he did for himself. Something he scapegoated onto his family until this very last episode.

And we get to the final act. Of the show. Of Heisenberg.

In one final manipulative move, Walt get the neo-nazis to haul Jesse out of his meth lab prison and into the room with his former teacher. Now whether Walt had intended to save Jesse from the get-go or changed his mind about killing him once he saw the conditions his former partner was working under will be debated amongst fans. Regardless, we finally see the machine gun in action. I know Heisenberg is smart, but that pulley system he concocted is some MacGiver-level shit.

In the midst of it all, a bullet penetrates Walt's abdomen. Seeing this, Jesse denies Walts plea for death. The call from Lydia was a nice final "fuck you" to a woman who managed to cause a whole mess of trouble. And Jess's smile as he burst through the gates made up for all the awful shit he's been through since season 1.

And Walter White dies the way he lived. I half expected him to blow the whole place up in a final goodbye. But that is not his style and no one would know his legacy had ended. It also drew some of the heat off Jesse, giving him time to escape.

This was a satisfying conclusion to what will surely go down as one of the greatest shows of all time. Rarely is a show so widely loved by fans and critics alike. The finale was concise, got straight to the point and ended. No BS. I can only hope more shows follow by example . Breaking Bad is a masterpiece and was one hell of a ride.