Winter is here but spring rolls are near. 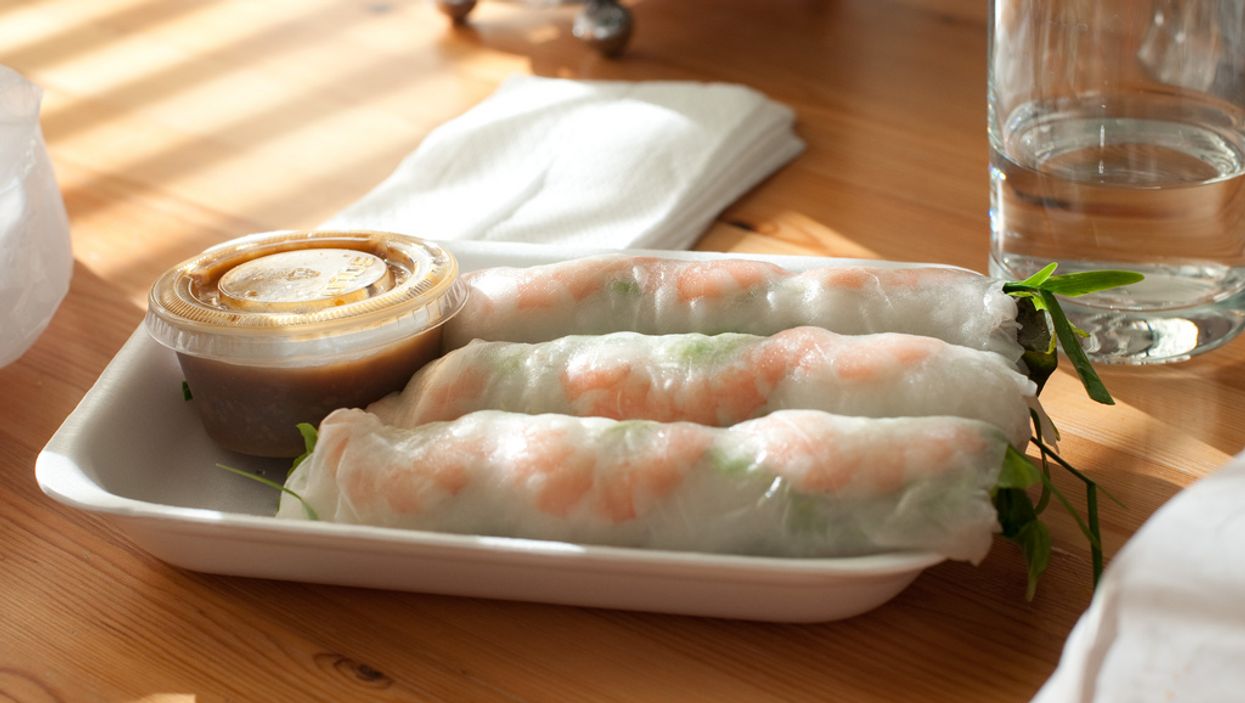 What better way to counteract the throws of winter than by eating Spring Rolls! Specifically Vietnamese fresh spring rolls, or gỏi cuốn, traditionally made with vermicelli noodles, crisp vegetables, and wrapped in a moistened rice paper. Not to be confused with the fried variety, this healthy appetizer is generally stuffed with shrimp, but can also contain other proteins as well, and served with a savoury peanut sauce for dipping. Spring rolls make a great snack on their own, or go great with a nice big bowl of delicious Pho. Here are some top choices where you can get your hands on Spring Rolls in the city.

Pho Lien is one of the best vietnamese restaurants, or at least one of the most popular, in Montreal because they consistently deliver solid food, including very tasty spring rolls. Their pork and shrimp rolls neatly wrapped in rice paper are fresh and crunchy and go great with their peanut dipping sauce.

This little NDG shop, as their name implies, do a wicked good Pho bowl, but you gotta try their spring rolls. Pho Sho offers both a standard roll with shrimp and Thai basil as well as a chicken one, which is friggin' delicious. Either get 1 roll by itself for $2.95, or preferably one of each for $4.95.

Yes, Thai Express is where you get Pad Thai, and yes, it is a corporate chain, but that doesn't mean they don't have legit spring rolls. They are not always really advertised, but it's as simple as asking for one of their massive veggie rolls made with lettuce, bean, sprouts, carrot, coriander, mint and vermicelli, or add three fat shrimps to the mix for some protein.

Ever been standing outside Old Orchard on Prince Arthur and wondered what in the hell was in the store next door covered in plants and vines? Delicious spring rolls, that's what. Simply called Au 14, the Vietnamese food here in general is very good, but their spring rolls definitely hit the mark. Vermicelli noodles, pork, shrimp, pickled veggies and peanuts all rolled up in rice paper and served with a slightly spicy peanut sauce. Plus it will only set you back $3.

You might be tempted to walk by the basement location of Caravelle while wandering around Crescent Street, but that would be a mistake. Apart from their amazing bahn mi sandwiches, Caravelle's homemade spring rolls are some of the best in the city, or at the very least, the area. Next time you find yourself on Crescent, pick up some spring rolls here and enjoy them on their colourful terrasse.

While the Maison Thai on The Main sadly closed, the one on Mount-Royal is still offering up some fast and inexpensive eats, including some delicious and filling spring rolls. Crisp vegetables, fresh mint, and juicy shrimp are cheap and ready to grab when you want something of the non-grease variety.

No surprise that you will find some tasty spring rolls coming out of Chinatown. Pho Bang New York is a a busy spot for solid Pho and other Vietnamese items. The spring rolls here are stuffed with huge chunks of pork in addition to shrimp and are served with a wonderfully authentic peanut sauce.

Located in the Village, Cafe Saigon is usually bustling with UQAM students who go there for fast service and good bang for their buck. Cafe Saigon offers all the staples, including large, flavourful spring rolls. While it doesn't look like much from the outside, the food is consistently good and it's BYOB!

Another no-frill spot in Chinatown, but an absolute gem for great Vietnamese food. Their shrimp rolls are plump and fresh and paired with two different kinds of sauces. A sweet and sour sauce with carrots and cabbage, and a seriously delicious homemade crunchy peanut sauce. Pho Bac 97 offer meal combos that come with spring rolls as well that include a flavourful soup and a chicken stir-fry.

Pho XO's exterior could be considered quite deceiving given its rather fancy interior. Along with a large menu offering many appetising dishes, the spring rolls are also top-notch. Pho XO offers a variety of rolls as well with your choice of shrimp, beef, grilled chicken, or shrimp and beef combo. And Pho XO even host karaoke nights!