You gave up meats, but not eats.

Montrealers are a diverse bunch, and their eating habits are equally varied. Wherever you’ll go in the city, you’ll find meat-lovers, vegetarians, and last, but certainly not least, vegans. Although there are plenty of people around town who refuse to eat meat or dairy, it can sometimes be a challenge for them to find tasty options. However, if you look closely, you can find plenty of good vegan food, and we’ve tracked down the best the city has to offer. Here are Montreal’s best vegan restaurants.

We’ve already discussed the merits of the delicious Dragon Sandwich, but the rest of the menu is loaded with delicious vegan options, too. We particularly love their bowls, which are packed with rice, perfectly cooked veggies, and tofu or tempe, then doused with one of many delicious sauces. Wash one down with one of their tasty juice combinations, and you’ve got yourself a hearty vegan meal.

You wouldn’t think that an entirely raw and vegan meal would be your ideal supper, especially if you’re looking to fill up, but these guys will prove you wrong. They prepare innovative raw takes on dishes that you wouldn’t could be served vegan, let alone raw, such as their nachos or pesto lasagna. They use innovative cooking techniques, such as dehydrating flax, to present raw food in a way you never thought would be possible.

This place is widely considered to have some of the best falafel in the city—and that’s when it’s competing with restaurants that aren’t vegan. They fill their pita sandwich with tasty and unique toppings like sauerkraut, sprouts, pickles, and more, to deliver a falafel experience you’ll never forget. Even better, they don’t stop there, offering a wide array of vegan smoothies that use dairy substitutes like coconut milk and soya kefir.

Photo Cred - This is Why We're Fat

This restaurant is vegetarian rather than strictly vegan, but they offer the option of ordering nearly all of their dishes as vegan, making it extremely vegan-friendly. Even better, yummy platters like their green curry and tagine are served only as vegan, so vegans won’t have to compromise at all. It’s a great place for non-vegans and vegans to eat together, because the non-vegans can chow down on indulgent options like their Three Cheese Lasagna, but the vegans don’t have to feel jealous. 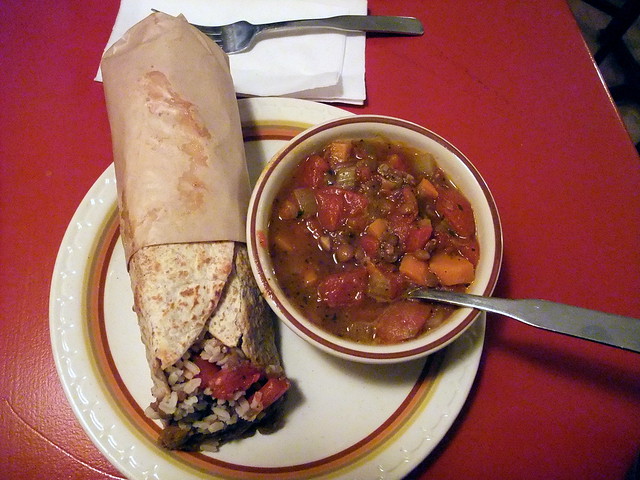 Mexican cuisine seems like it would be hard to serve vegan, but these guys prove that it’s possible. Not only do they pull it off, but they make it so good that non-vegans will be happy to sacrifice meat and dairy for at least a meal. In all of their dishes, the cheese can be replaced by guacamole or sweet potatoes, rendering them deliciously vegan-friendly.

Vegans can sometimes struggle to find protein sources, but they certainly won’t have a problem here. They make hearty Thai vegan options by crafting renditions of classic dishes like panang beef and ginger chicken out of soy protein and wheat gluten. As much as we love them, you don’t have to take our word for it—their miam kriam (made from coconut, ginger, nuts, and lime) won a Quebec finger food award in 2005.

The menu here offers a wide variety of options, so you’ll find something to suit your needs no matter what sort of vegan food you’re in the mood for. If you’re looking for something light, they’ve got you, because you can sample deliciously delicate options like their spring flowers served on organic greens. However, if you’d rather go heavy, you can chow down on their hearty curry stew or their homemade pizza.

This place has to deal with some hefty vegan competition, since they’re right next to Crudessence and Green Panther, but they still manage to stand out. They offer gluten-free, sugar-free, and vegan takes on foods like doughnuts and waffles. Students, you guys will definitely want to head here, because you’ll get 10% off of every purchase.

Don’t come here if you’re hoping for a wide array of options. Every day, they offer just one vegan meal, which is determined based on what foods are seasonally available. However, if you’re willing to trust them (which you should), you’ll be rewarded with incredible dishes like yellow curry atop basmati rice, topped with purple cabbage and coriander. If that’s not enough, wash it down with some yummy complimentary tea.

You might think that poutine would be difficult to serve as a vegan dish, but these guys will make you think differently. Their La Végomane poutine combines their legendary fries with vegan cheese and sauce, meaning that vegan Montrealers don’t have to abstain from the city’s favourite food. We here at MTL Blog firmly believe that drunk vegans shouldn’t be stopped from feeding their drunchies, and, thankfully, the guys at La Banquise agree with us.

Still hungry? Click here for the 10 Montreal Middle Eastern Restaurants You Must Try Before You Die >