Celebrities Savagely Roast Trump In Support Of Trudeau And Canada 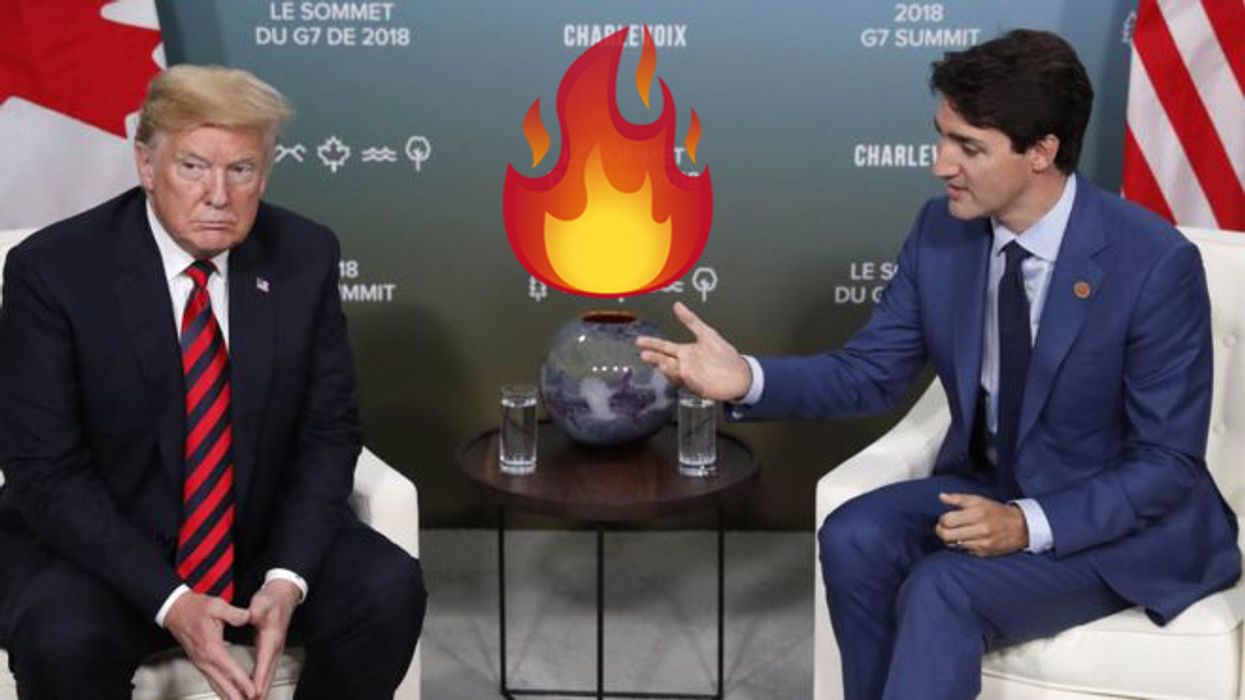 So, we all know about the G7 Summit that went down in Quebec last week.

There were tons of protesters, arrests were made, and people were burning furniture to block highway roads. It's been all over the news, social media and now its hit late-night television with comedy skits and commentary.

Amidst all the talk of trade wars between Canada and the U.S. due to implemented steel tariffs, Trump was here to negotiate on this, but the U.S. president just made everything worse by going on a Twitter rant following the events - clarifying once again that he is nothing but a joke.

Though, as usual, Canadians are in on the joke.

Now, it's been a few days since the G7 Summit, and since some time has passed it has given the opportunity for the public to speak up. It all begins with celebrity statements and late night television.

As I'm sure you know, Robert Deniro gave a scathing comment towards his president in Toronto recently. This comes hot of the heels of his F*ck Trump statement at this year's Tony Awards.

The online response for Deniro's statements has been pretty intense. The vast majority of those are supporting his sentiments, but some found them deplorable. Still, Deniro won the hearts of Canadians.

Then it was time for Late Night television to get in on the conversation. Conan featured his one Canadian writer on a short skit showing the deep, dark, un-real mean side of Canadians. Cause we're ruthless.

Seth Meyers also jumped in on the train and had some comedic remarks to add to Trump's humiliation.

Now, I'll direct your attention to a new #s taking over social media. #ThanksCanada and #ThankCanada! Our American friends seem to be (for the most part) on our side and are showing their support.

While some of these #ThanksCanada tweets are just downright funny (cause they're true!), others hit me right in the feels.

#ThanksCanada For hockey. And poutine. And Sidney Crosby. And ketchup chips. And for being awesome. (Seriously, you guys are way cooler than us) 🇨🇦❤️

I met @JustinTrudeau in February. I said #ThanksCanada for being California’s 2nd largest trading partner, directly supporting over 1.1 million CA jobs. He was gracious and well spoken. I wish a Canadian legislator was able to say the same after meeting our head of state. pic.twitter.com/GRk6AQdP0Q

#ThanksCanada for giving this American the best husband ever and letting my kids and I immigrate relatively painlessly, while the US didn't want one of the hardest workers I've ever met.

This right there, this is what it's all about. You're welcome Amy Garrett!

Musician David Wild of Rolling Stone magazine seems to have started this trend, and its gotta be the best # I've seen on social media in ages!

Americans love us up here, for the most part.

#ThanksCanada we don’t deserve a friend like you 🇺🇸✌️😘

“Geography has made us neighbours. History has made us friends. Economics has made us partners, and necessity has made us alies. Those who nature has so joined together, let no man put us under.” - John. F. Kennedy speaking about the US and Canadian relationship. #ThanksCanada

For the Underground Railroad. #ThanksCanada

“There are no closer friends that we have than the Canadians. And we share values, we share culture. The ties between our people are extraordinary. We are NATO Allies, and across the board, our interests align.” - Barack Obama#ThanksCanada pic.twitter.com/2o3G76ybwo

Because it is also Pride month - which by the way, the Trump administration publically declared he would not acknowledge Pride month in the U.S., here's another one that warms my heart!

#ThanksCanada You welcomed us with open arms when we wanted to marry and could not in the US. pic.twitter.com/7LGhNxPhaN

#ThanksCanada and @JustinTrudeau for everything you do! You are a fantastic leader of an incredible country and MANY Americans love you guys! So sorry for the puerile and foolish actions of our current leader. Our next leader will be an improvement, we promise.

#ThanksCanada for Tim Hortons and politeness. You’re basically everything a neighbor should be. XO - your Southern Neighbor who’s going through a bad divorce right now

As you might expect, though further and fewer between - some Americans didn't shy away from showing their ignorance and support for Trump against Canada. Much like this broad right here.

I don't really have any reason to thank Canada, I just have a request. Hey, Canada, STOP SCREWING OUR DAIRY FARMERS!

Maybe another request. Hey, @JustinTrudeau, stop allowing in unvetted Muslim refugees because that gives them access to the US.
#ThanksCanada🇨🇦 #MAGA🇺🇸

None the less, Canadians are good sports and we can laugh it off while showing some shade and integrity as this Twitter user shows.

As a Canuck, the majority of the #ThanksCanada tweets are sweet, welcome, and honestly uplifting. To the negative/mean ones, shove off. 😘 pic.twitter.com/Jwqk3C6imx

I've spent a good portion of this morning looking through all these tweets, and there are THOUSANDS of them! #ThanksCanada has lifted my spirits!

If you want more of this stuff, jump in on the conversation with #ThanksCanada and #ThankCanada on your chosen social media - trust me, it's everywhere!

Way to go, Canada! We rock.