The physics of this are mind boggling. 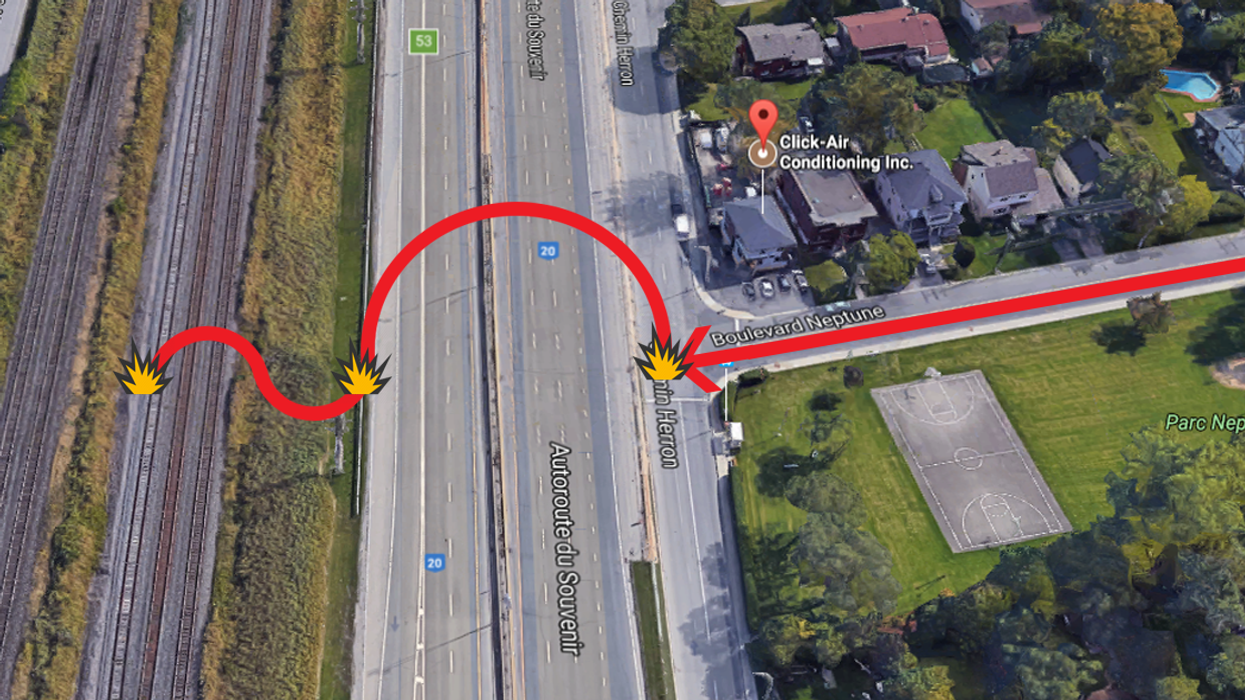 A lots of cities like to claims they have the most dangerous drivers out there, but in Montreal's case we may actually be right.

Our drivers simply have a talent for doing incredibly, and sometimes physically impossible things.

So when you hear a story about a Montreal man who managed to make his car jump over 6 lanes of traffic on highway 20, it's not exactly shocking. Although it does make you wonder how the hell he managed to do it.

The accident was reported to CJAD by a man named Matthew Berube.

“I look over and there is a car airborne. I watched it clear all four lanes of rush-hour traffic, land nose-first in the ditch on the Cardinal side of the 20. It then rolled end-over-end, rolling over the first two sets of train tracks, then landed on its roof in the middle of all four sets of tracks.”

When police arrived and the witnesses told them what happened, they didn't actually believe it. Later they confirmed that the car did manage to completely clear the highway.

What's ever crazier is that somehow the man managed to survive the initial crash and witnesses claims they saw him crawl out of the car and ran away from the crash. Sadly he died later that night.

At the shore of the Saint Lawrence River in Nicolet, Quebec, is a boardwalk trail that offers spectacular views through the forest and across the marsh of the local Parc écomaritime de l'Anse-du-Port.

The 710-metre trail leads to a 12.3-metre lookout tower, where, from the top, it looks like the boardwalk stretches endlessly through nature.

The Montreal Museum of Fine Arts has been free for on the last Sunday of every month for awhile now, but I bet you didn't know that you could go to ALL the collections and discovery exhibitions for free! This is not a drill.  You officially  don't have to spend a dime to see beautiful artworks from all across the globe.

READ ALSO: The Most Beautiful Apple Orchard In All Of Quebec You'll Want To Visit This Autumn

Quebec is home to some stunning flower fields and farms, however none compare to this stunning "pick your own" flower field located near Montreal. With a variety of flowers ranging from sunflowers, daisies, tulips and many more, you can expect to make a beautiful bouquet and take some fabulous Instas!

READ ALSO: 25 Montreal Restaurants Have Been Ranked Among The 100 Best In All Of Canada

You Can Now Get 'Drinkable Cotton Candy' In Montreal

If you happen to just ADORE cotton candy, then you probably have a big sweet tooth that can be quenched with this insane smoothie! It is referred to as drinkable cotton candy and can be bought right here in Montreal. It's sweet, yummy, and 514% delicious.

READ ALSO: These 9 Montreal Restaurants Have Been Ranked "Best In The City"