"Elysium" Shoots Bionic Matt Damon Into Space, And It Is Awesome. 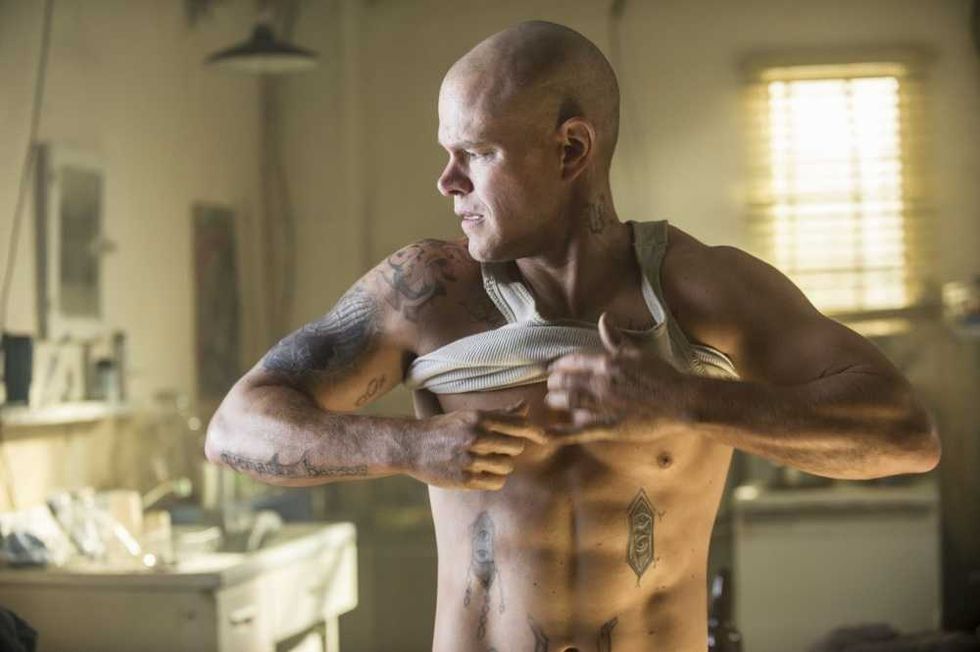 There's been a recurring theme, it seems, with blockbusters this summer. There are always end of the world/post apocalyptic movies, almost annually, but not more than the summer of 2013. Tom Cruise's Oblivion, Will Smith's After Earth, even comedies like This Is the End have taken the apocalyptic route.

Well here's one more for ya! Elysium casts Matt Damon as Max DeCosta, a factory line worker who gets blasted with a lethal dose of radiation. Now rather than getting him the proper medical treatment (remember the year is 2154, they can cure just about anything), Earth's overpopulation and exponential poverty means Max can be tossed out with the trash.

Now in this future, the rich decided to gtfo and build a world in earth's orbit by way of a massive ship known as ELYSIUM. Obviously the rich hog all the future disease-curing tech whilst playing tennis and being all posh. This leaves just about 99% of the human race left on Earth and in the worst conditions. Robots patrol cities just being dicks and keeping the "peace".

And with only 5 days to live, Max accepts a suicide mission to Elysium to heal himself and unlock the airspace around Elysium so that earth's inhabitants can safely, though illegally, get into Elysium. The whole thing is one giant Mexican border. But before doing so he goes under the knife in a very graphic scene that leaves him permanently bonded to an exoskeleton, allowing him a slight superhuman strength. This might sound ridiculous, but do a quick YouTube search, this stuff already exists!

Neill Blomkamp is back in the director's seat after the fantastic job he did in District 9. The one consistency I've noticed in Blomkamp's films is his attention to detail and to giving his sci-fi stories a grounding in reality. The situations, the people, their reactions are so very human and don't feel too scripted if you put yourself in their shoes. And Blomkamp's insane gun style from District 9 is back, this guy knows his badass sci-fi weaponry!

Damon's character undergoes a fantastic development from complicit worker to avenger of the Earth people. Jodie Foster is cold and sinister as Elysium's Secretary of Defence. But as far as villains in the film go, Sharlto Copley's renegade agent Kruger is absolutely fantastic. He's fucked up with just the right dose of crazy. I would argue he was almost on par as a villain as Christoph Waltz was in Inglorious Basterds. And this isn't a happy story, the world is shit and most people are dicks, so prepare for a few "fuck..." moments.

-Story has some lulls