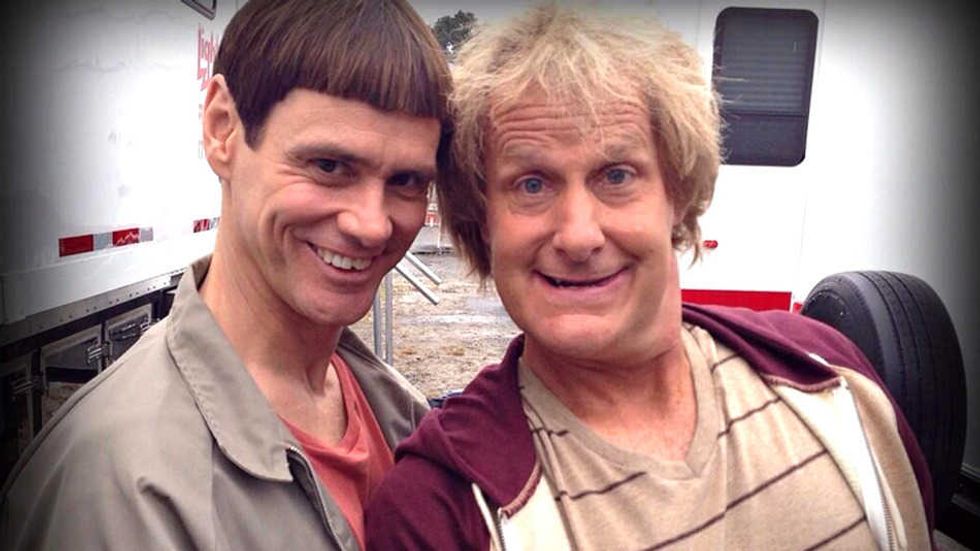 The filming of the Dumb and Dumber sequel, titled "Dumb And Dumber To" (get it!), is in full swing, and the actors look like they're having a great time on set!

Jeff Daniels, who recently won an Emmy for his performance on HBO's The Newsroom, Tweeted pictures directly from the set of the upcoming sequel alongside the other half of the film's comedic duo and comedic legend, Jim Carrey.

Jim Carrey also uploaded a picture to his WhoSay account showing he and Daniels trying to read "How Roland Rolls", a recently released children's book written by Carrey. Who'd have thunk that parents would be reading a story written by a man who slid out of a rhino's butt, naked.

As the hype builds, it seems Daniels believes it's justified. “The scariest thing (about filming a sequel)? There are some things that we’re going to do in Dumb and Dumber 2 that make the toilet scene [in the original] seem lame."

The movie is slated for a 2014 release. Do you think Dumb And Dumber is a timeless classic that can withstand a 20 year gap since its first installment? Or is it time for the actors and the fans to move on? let us know in teh comments below!