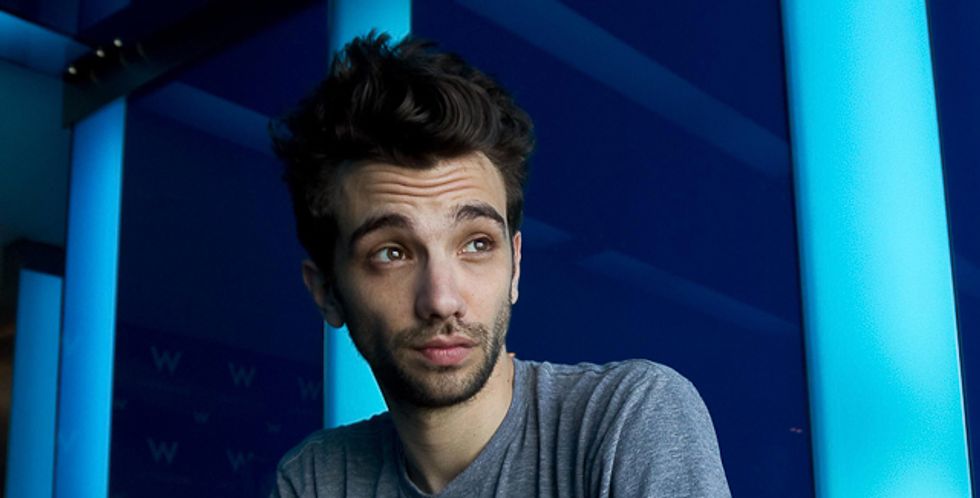 NDG’s Jay Baruchel (This Is The End, Tropic Thunder) held a mini press conference today at the Mainline Theater in the Plateau to discuss his upcoming foray into the comedy world via his first ever Just For Laughs Gala!

Baruchel admitted that being a lifelong fan of Rowan Atkinson (Mr. Bean) and Michael Richards (Seinfeld’s Kramer), he’s been channeling his idols’ comedic styles throughout his entire acting career. Now that he’s becoming the fourth Montrealer to host a Just For Laughs Gala, Baruchel says he’s got some surprises in store for his upcoming audience members.

Baruchel, a die-hard Habs fan, recalled the time he had to undergo the torturous task of sporting a Pittsburg Penguin’s jersey in his 2010 film “She’s Out of My League”. “At least it wasn’t a Boston or Leafs jersey! And I got to meet Sidney (Crosby), so it wasn’t that bad. But it's still the wrong jersey,” said Baruchel.

The 31-year-old also divulged that it was his passion to one day write and direct action and horror flicks. So when he was on-set during the shooting of Million Dollar Baby, actor/director Clint Eastwood’s presence was more than a little overwhelming. “I thought, oh shit, this is a real movie! I can’t fuck this up,” said Baruchel.

This being quite possibly the hottest and most humid day Montreal has seen this summer, Baruchel told us that he survives the city’s apocalyptic weather gracefully, thanks to his newly installed Central AC. But when he’s out of the house, Baruchel will almost always opt for a Freezie rather than ice cream. “I just stock up on Freezies, that’s how I survive,” said Baruchel.

Baruchel will be hosting the aptly named “JAY BARUCHEL GALA” on July 25th, alongside comedians Hannibal Buress (Whom Chris Rock has deemed one of his favourite up and coming comedians), Amy Schumer (Who placed fourth in NBC’s “Last Comic Standing” in 2007), and Internet sensation Bo Burnham (Seriously, check this guy out over at Youtube!).