Les Bobards Music Venue On Saint-Laurent Has Closed Down Forever

Another Montreal institution bites the dust. 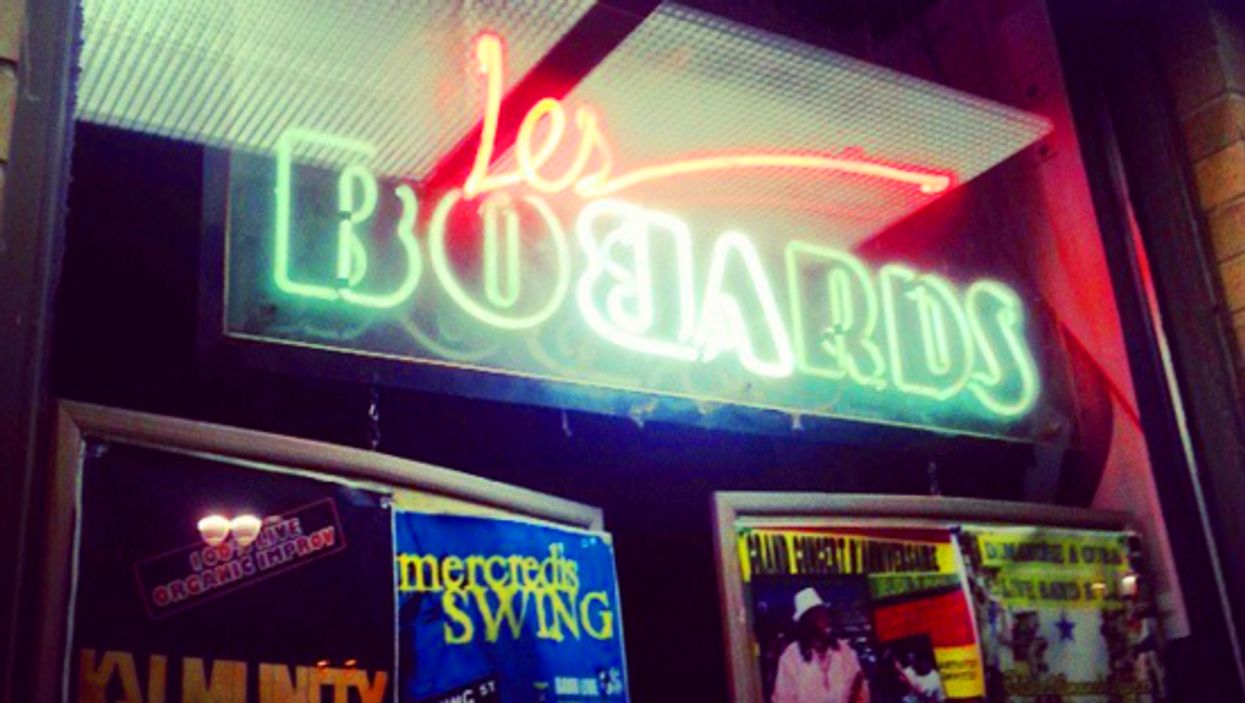 Each and every night of the week for the past 26 years, one Plateau bar-venue has provided live tunes to the Montreal community, benefiting both the borough's local culture and music community: Les Bobards. But as of this past Saturday, the beloved bar has closed its doors, never to reopen them for a single show or performance, as the Les Bobards staff revealed via Facebook.

In a not-very-revealing Facebook status, Les Bobards stated "Les Bobards closes its doors definitively today for breach of lease," and then continued to "thank [their] loyal customers and all musicians, artists, DJs , technicians and employees who helped make Les Bobards a bar and cultural venue that so many people liked over the past 25 years." There might have to be an edit on that last bit, as Les Bobards opened in 1989, so it's closer to 26 years.

You can definitely feel the love and remorse in Les Bobards' closing-notice, but curiously, no specific reason was given for the venue's "breach of lease." If you've been following the Les Bobards-related drama over the last couple of years, it isn't too hard to guess why the bar was forced to close. Most likely, Les Bobards was forced to close down from incessant noise complaints, an ongoing problem for the bar that must have come to a dark conclusion over the weekend.

Lacking a license to "present show on an elevated stage because it sits next to residential buildings," as noted by CBC, Les Bobards has had a rocky relationship with Plateau residents. The venue even went as far as soundproofing the space two years ago, but it looks like that wasn't enough. Even though the bar garnered support from groups like Save The Plateau, no action was taken from official Montreal leaders to ensure the venue's safety.

Borough councillor for the Plateau-Mont-Royal Christine Gosselin lamented the loss of Les Bobards in a note to CBC, stating "the elected officials of the Plateau-Mont-Royal are very sorry that the Bobards was unable to overcome its difficulties to continue its mission. I, for one, hope that manager Rabah Mammouche will be able to translate his expertise in other projects that will revive the spirit of Bobards." Kind of getting a "sorry, not sorry" vibe fro that, but that's just me.

For all those in a state of crisis wondering what will become of their favourite music events regularly held at Les Bobards, well, we can't offer you much comfort. We can confirm, however, that improv music collective Kalmunity, which usually peformed at Les Bobards on Tuesday nights, will be heading to Le Belmont for this week's show as the group revealed on their Facebook page.

Les Bobards, you will be missed.

P.S. Hey y'all. I've been gone a while, and I know you missed me, but I'm back. Expect a lot more posts outta this guy from here on out.

10 Awesome Places That Have Opened Up In Montreal This Year

The new kids on the block.

We've all had to morn the loss of some of our favourite stores this year. In Montreal, businesses open and close like clockwork. But instead of focusing on the negative, we've decided to focus on the positive. So, let's celebrate 10 awesome businesses that have gotten their start in 2015!

In only their first week of business, the Red Bird Cafe has already impressed their customers. Most of their food is based off family recipes, so you know it has a hearty taste. The delectable pastries coupled with health conscious meals make this new cafe a place to watch out for.

The only place in Montreal where you can play old style arcade games on the regular. Arcade MTL a one of a kind, and their Thursday events have been killing it in 2015!

Newtown has been incredibly respected bar on Crescent St. for a few years. But their new mojito bar (that opened this summer) has really been stealing the show.

This one is strange, since it's not technically "new". The famed McGill pizza joint, Ameilos, broke hearts when it closed down in January of this year, but then rekindled the love when it reopened with a slight change of name and the same food. You can read the full story here.

A show-stopping location and luxurious dishes make Albert Bistro a fast favourite in our books.

It's a German style beer hall, designed to make you feel like it's Oktoberfest everyday. Need we say more? It opens up in July, so I suggest you start lining up now.

This place is a little out of the box, but none the less, it's still pretty cool. It's an escape style gaming experience that you can play with your friends. The whole ting is a tad hard to explain so we suggest reading this to learn more. Regardless, it's been stealing Montrealers interest since it opened earlier this year.

Cafe M has taken the cake for best study spot in 2015. They have great coffee and a zen atmosphere. Their shop makes doing your homework less painful then it would normally be.

I know Tesla existed long before 2015, but I think they deserve a shout out since they became the first electric car dealership in Montreal. Yay for the environment!

It's not open yet but I just know it's going to be amazing. I am patiently awaiting the ample support to come in Fall 2015.

Why We Hate Christmas Time In Montreal And So Should You

The magic of the Christmas season in Montreal, it's a lie we all buy into each and every year without fail, because our inner 8 year old refuses to accept that, in actuality, the holidays season kinda sucks. Presents stopped being great when you had to start buying them for people, Christmas music is a legitimate form of torture, and your eyes are forced to gaze upon the ugliest of sweaters, not to mention on all the forced family time.

Montreal's Top Weekly Events You Will Keep Going Back To

Montreal is always bumping with wicked events to keep things spicy. From Igloofest to after-hours, life in this city seems to operate on the motto "work hard, play harder." For those nights where you've got the itch to get down but your favorite headliner isn't in town, there's always a wild weekly event to hit up with your crew.

The first stage of the 2014 World Cup in Brazil begins June 12. Despite much controversy surrounding mass evictions of "favela" dwellers, state-sanctioned murder, and misuse of public funds, we're still excited for the footie. Canada didn't qualify, so we can root for America (tough draw), The Netherlands (vs. Spain), or Mexico (North/Central America pride). Rooting for France is obviously an exercise in futility, unless you're rooting for the yearly meltdown. Also, you can roll w/ a new team, I personally rep Côte D'Ivoire, 'cuz Drogba 4ever. Anyway, here's some of our favorite spots to watch the Cup, with an emphasis on smaller and team-specific bars and restos. Please tell us about your favorite little spots to catch a match!