"Our main goal is to give people smiles," said the project's creators. 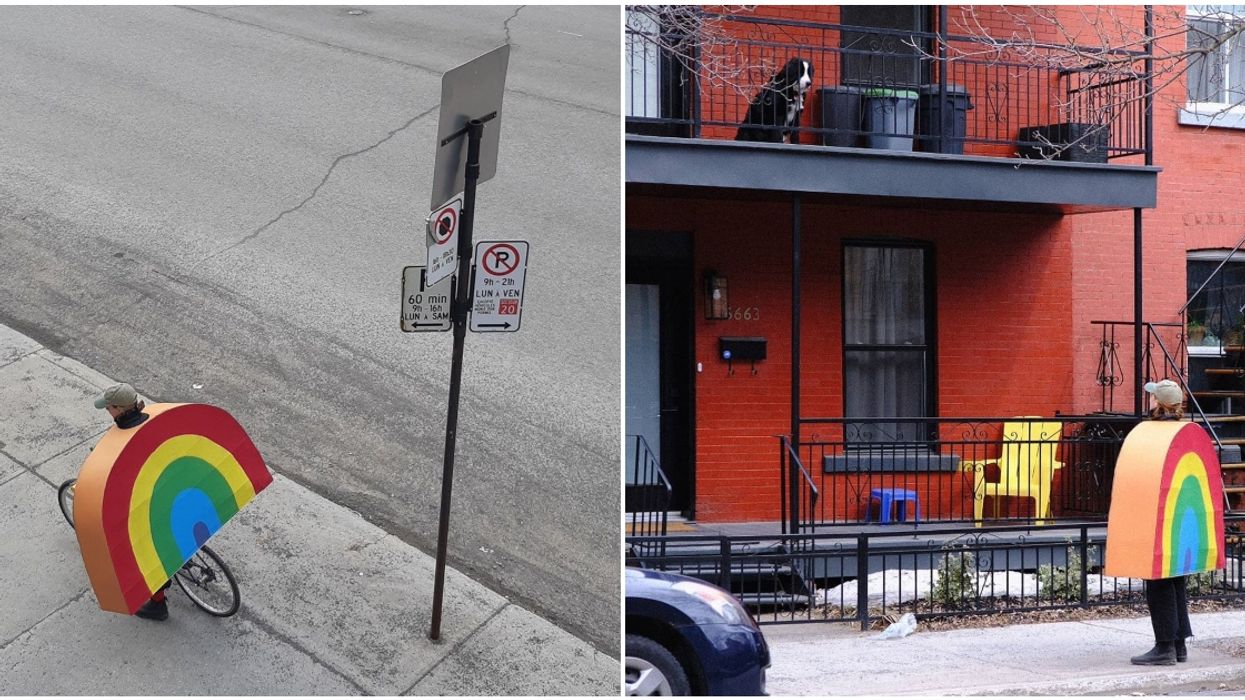 Montrealers, particularly those in the Villeray and Rosemont–La-Petite-Patrie area, may have been treated to an unlikely sight this weekend. A person, dressed in a massive rainbow costume, was spotted meandering through the streets of the city. It's a personification of the Montreal rainbow window trend.

The project, a 48-hour challenge taken on by two friends who wanted to spread a little love in these trying times, involved walking in a rainbow costume that allowed the wearer to keep a two-meter distance between her and curious onlookers.

The culmination of the project is a video montage of a curious rainbow wandering slowly through the streets of the city.

Ultimately, the project is an ode to the resilience, creativity, and positivity of Montrealers living through an unprecedented and difficult period.

The project can be found on the Instagram page @arcencielbalade, whose bio reads "Spread love, not COVID-19," and on the Facebook page NICE TRY - belessai.

We spoke with the project's co-creators, Gabrielle Poulin and Antonin Gougeon, to find out more about the creation, the inspirations behind it, and how exactly one goes about making a giant rainbow costume.

The project was created for NICE TRY - belessai, a platform challenging artists to create a performance, theatrical or musical piece in under 48 hours.

This challenge was taken on by Poulin, an actor, creator and performance artist, as well as Gougeon, a sound and video designer.

The pair walked through the city, filming Poulin in a giant rainbow costume.

The rainbow can be seen waving at dogs, reading the newspaper, taking out the compost and other mundane activities.

When asked how one goes about creating a rainbow costume spanning more than two meters wide, the answer was simple: "a balanced mix of skills and luck."

The co-creators were inspired to create the Instagram page and video by the many rainbows that have been popping up in windows in the city to cheer on residents.

The pair said that they "really liked the idea, and wanted to push it to its limits."

They were also inspired by the social distancing measures that have forced the city and its residents to halt usual activities.

The final project, a video titled "AU RALENTI" (slowed down), can be found on belessai's Facebook page.

The video describes the rainbow as "all proud, all crooked, all handsome, all soft, all strong, all big, all small [...] Here comes the sun is in slow motion, but the sun is there, and it's heating us all up!"

The video has already garnered thousands of views on Facebook.

Said Poulin and Gougeon: "We want to spread the love this way because we believe viral content is an amazing way to reach people quickly and in their home, which is particularly useful in a quarantine context."

"Our main goal is to give people smiles and to democratize performance and web art."

People are applauding their creativity.

It seems that they achieved their end goal of spreading a little love and light in these dark times.