Don't be scared if you see one on your windshield. 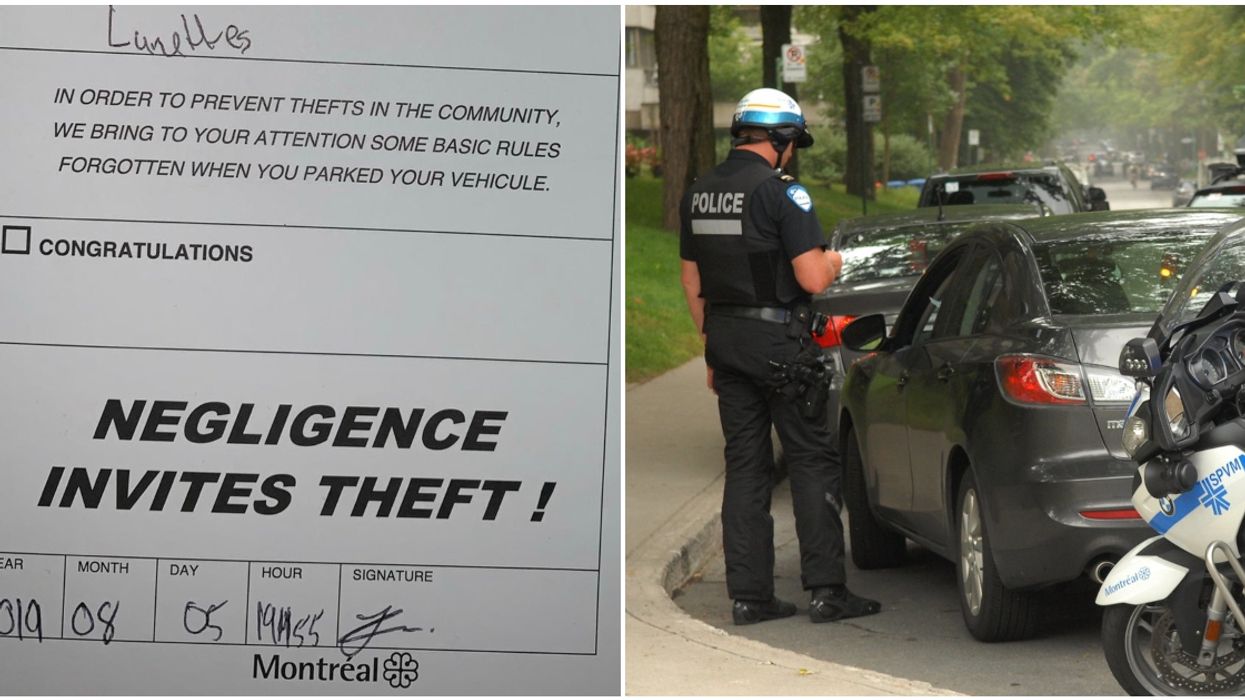 If you recently got a notice on your car that threw shade at you for inviting theft, you're not alone. Such alerts are part of an initiative that the Service de police de la Ville de Montréal (SPVM) has been conducting for a few years.

One MTL Blog reader was shocked when they found this notice on their car after shopping at the Galeries d'Anjou Monday evening. Thinking it was a ticket, our source was relieved to find out that this was only a warning against theft.

We spoke with our source and reached out to the SPVM to see what they had to say.

"I went to Galeries d'Anjou and left a pair of sunglasses in the car, like not really in view," says our source. "They were where I put my coffee mugs."

They hadn't noticed SPVM cadets patrolling the scene, but even if they had, our source wouldn't have expected this.

"I came back and saw the notice. Apparently, it's cadets writing notices to cars," they say "I just don't get why they would look in every single car."

We reached out the SPVM's media relations team about this and here's what they had to say:

"We've been leaving courtesy notices on cars for the past few years to warn people not to invite theft. In the Anjou neighbourhood, police cadets issue notices as part of an anti-theft initiative."

Watch the MTL Blog video below for more information:

READ ALSO: Montreal Police Are Looking For Other Possible Victims Of The Man Who Verbally Assaulted Two Women & A Child

While our source was lucky they didn't incur a fine, sometimes, police will issue tickets to people who, in their minds, invite auto theft.

Car theft is, in fact, one of the most reported crimes in the city of Montreal. For the SPVM, it's better to get a ticket than to be the victim of theft.

This past March, a couple from Wakefield, Quebec found about these anti-theft tickets the hard way. According to CBC News, the couple found that they had been issued a ticket for leaving their car doors unlocked.

They had no idea that they'd be issued a $108 ticket for leaving their doors unlocked, but according to Quebec's Highway Safety Code, "no person may leave unattended a road vehicle that is in his custody without previously removing the ignition key and locking the doors."

Though the law is rarely enforced, it's important to know that you're in for an expensive ticket if you incite theft.

Have you ever received an anti-theft warning on your car?