And we got to interview her owner! 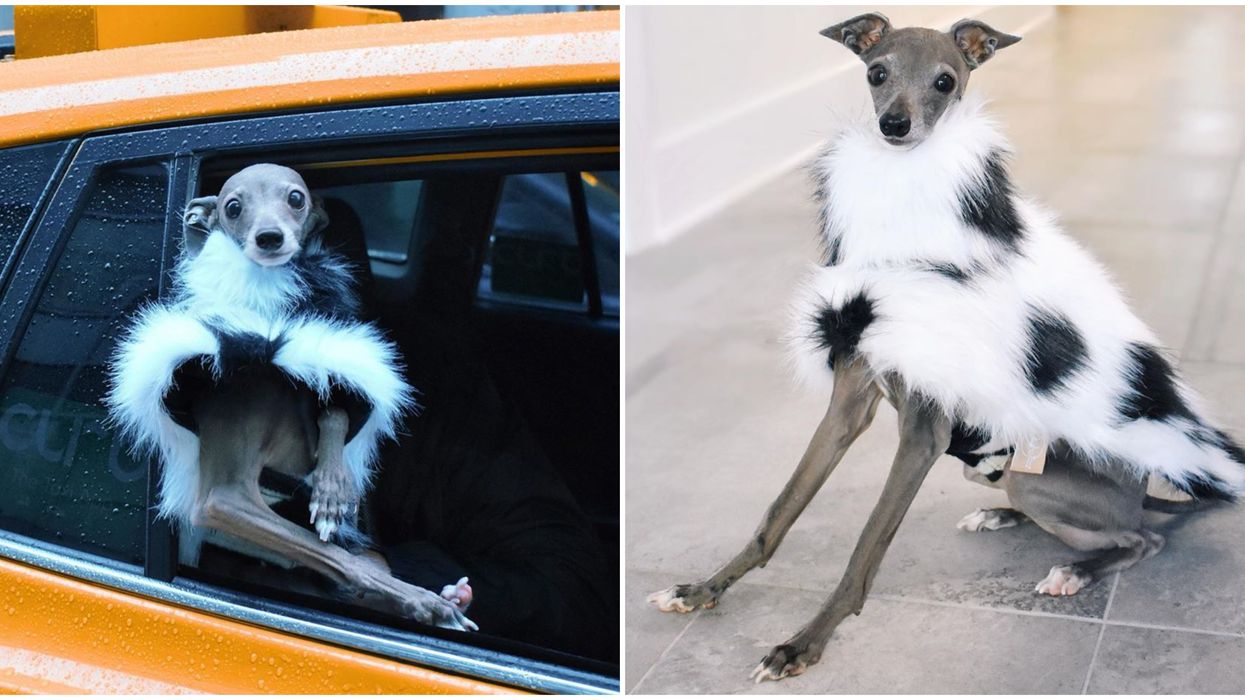 Tika the Iggy is one of Montreal's rising stars, and she's a dog. Not just any dog though, an Italian Greyhound with more Instagram followers than you and I will ever have, combined. And I got the chance to interview her owner, Thomas Shapiro, about Tika's fame, fashion sense, strange DMs, and pivotal life moments.

This pup has numerous claims to fame, including having one of her photos posted on the official Cosmopolitian Instagram page, and being invited to be on Good Morning America. She also has her own merchandise, which you can find on her website.

When asked to describe Tika in three words, her owner responded: "fashion, derpy, queen" — just to give you a little idea of her personality.

Throughout this article, I share some of my fav photos of Tika in the midst of quotes from my interview with her owner.

And I can say with 99% certainty that even the non-dog lovers reading this article will be hitting her with a follow directly after.

Whether it's for a little animal therapy, some fashion inspo, or just to read her clever captions, it's hard not to get lost scrolling through Tika's Instagram.

"I decided to make Tika her own account for two reasons. First, because whenever I posted a photo of her on my personal account, I’d get a lot of random people liking and commenting on it, which made me realize there was an interest in those kinds of photos outside of my personal following.

"And secondly, my friends would tell me I post too many photos of my dog.

"So, I decided to make a safe space for all my photos of Tika. Basically, it started out for fun, and then her page started to gradually grow."

How quickly did the page become a hit?

"I started the account in February 2016 and it didn’t become a hit too quickly. From the page's beginning to December 2018, she went from 0 followers to 20k. The growth was gradual, about 10k a year. At that point, it was a super niche thing.

"She’s almost at 150k now. 2019 was an explosive year for her. In January, I posted two photos of her in snowsuits and other pictures of her in the turtlenecks that go all the way up, and those got picked up by bigger accounts like BuzzFeed and Paper Magazine.

"Cosmopolitan even reposted some of her photos on their Instagram."

Does the page have any celebrity followers?

"Her biggest follower is Anitta, a singer from Brazil with over 44 million followers on Instagram. She’s basically the Beyoncé of Brazil. There are also a few drag queens that follow her, and a few influencers. Chloë Grace Moretz follows her too."

Here's her with Zach Aston-Reese from the Pittsburgh Penguins... The question is: who's a fan of who?

Where does Tika get her clothing? Does she like wearing clothes?

"She gets a lot of free clothing from greyhound clothing companies that make clothing specifically for Italian greyhounds or other dogs. It’s a win-win because the companies get to promote their brand and I get the chance to grow Tika’s page.

"It’s great when they send anything that has faux fur or really sleek turtle necks because it makes Tika look like the most fashionista dog with an endless wardrobe.

"When Cosmo posted the photo of her on their account, a lot of people in the comments were saying things like 'dogs shouldn’t wear clothes.'

"So, I had to jump in and defend her by letting people know that for this breed, it’s a necessity. We have fun with it, of course. But, since, as you can tell, she’s quite skinny, she needs a jacket and boots in the winter.

"Once we’re outside, she realizes that she needs the clothes on, so she’s happy to wear them."

How would you describe Tika’s personality?

"A lot of her Insta captions and photos have a specific tone that is actually based on her real personality. She’s super friendly with humans and is such a great dog, but she definitely is quite the diva.

"She is extremely picky in every aspect of her life, from her food to the weather, to where she’s being walked, to the type of clothes she’s wearing. She’s very much an only child."

How is it having a dog with more Instagram followers than you? Does Tika ever get recognized on the street?

"It’s super fun. I think she, me, we, are lucky. You can post hundreds of pictures of a dog and no one gets bored of it. Whereas for a human/influencer, it’s hard to do that without looking conceited.

"I get to overwhelm people with my dog and people are just like 'yes!'

"Someone recognized her once at the Atwater market. And it happened even more often when we were at PETCON in New York City — people were even running up to meet her. So, that was super cool. PETCON gave her a credible moment, like okay, she’s a real celebrity dog."

Do you have any future plans for the page?

"Right now, I’m kind of just trying to keep it as it is. Any brand deals we get really need to fit with Tika's message. I noticed a lot of people really trust what she puts out there, which is a cool way to create community.

"I want to keep it very fun and light. I get a lot of people messaging saying whenever they have a bad day, they go to Tika’s page and it makes them feel better.

"Messages like that make me aware that people are having as much fun with it as I am."

What is one of the weirdest DMs the page has ever received?

"Well, I can think of the fact that the page has received over a dozen DMs with people saying something along the lines of 'Tika, I would die for you.' Every time I get these, I’m like oh no… Please don’t do that..."

If this article has turned you into a Tika fan, you can stay up to date with her by following her Instagram page!