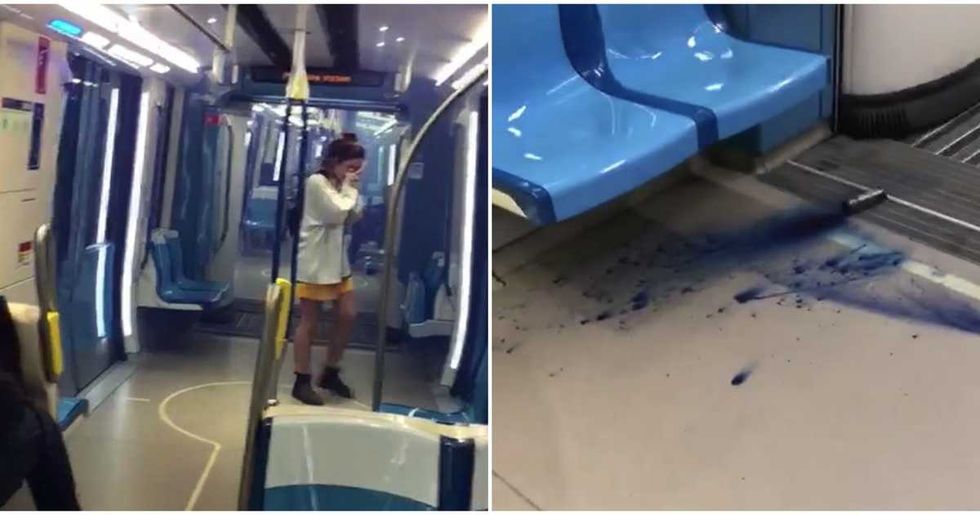 Late on the evening of June 18th, someone used blue spray paint on a green line STM metro train while it was travelling between Préfontaine and Frontenac stations, according to an eyewitness. The can released blue vapor and a strong ordor that spread through the vehicle.

According to a statement from the STM, "the métro operator quickly noticed that something had happened and after identifying the substance, another STM employee was sent to make sure that nobody would get stained by this mess while the métro operator was able to resume service."

Videos of the incident were sent to MTLBlog by Instagram user @hessami_ali. The train came to a stop at Frontenac station, where passengers disembarked and an STM operator contacted relevant authorities. The blue paint appears to have been isolated to one small section.

Watch the series of videos in an Instagram carousel below:

No one appears to have been injured. Though some passengers covered their faces and noses, others remained seated. The circumstances that led to the detonation of the small device are unclear. It is also unclear whether the individual (or individuals) responsible was found.

"The train was later pulled out of service for a cleaning operation. Obviously it’s strictly forbidden to use spray paint in the métro and this type of offence has consequences for all métro clients, as we were forced to pull the train out of service in order to have it cleaned," the STM statement continues.

Passenger-related incidents are the leading cause of metro service interruptions. In the last eight months, the STM has released three separate campaigns to educate passengers on how to avoid behaviours that could result in delays.

The incident involving the blue paint occurred after 11 PM and so was not documented on the STM Ligne Verte Twitter account.