And the clinic is actually co-owned by a tattoo artist! 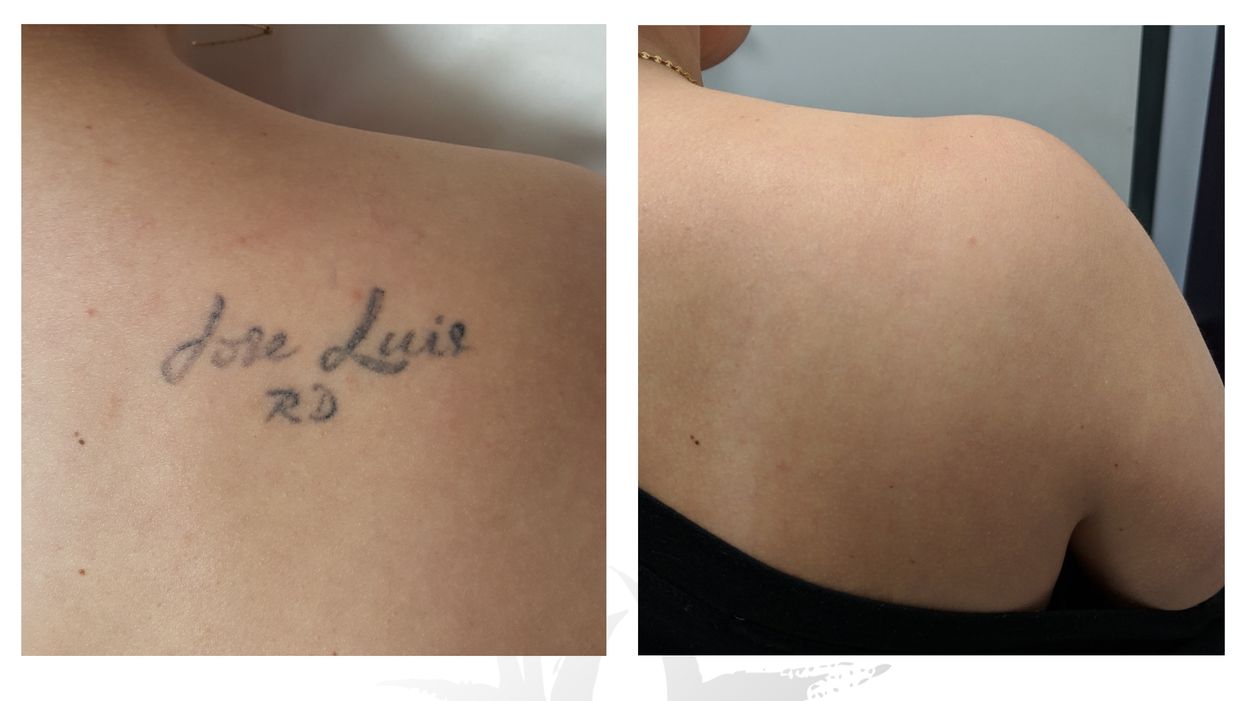 Everyone remembers getting their first tattoo: The anxiety of not knowing what it feels like, the excitiment of choosing your design - hearing the buzz of the tattoo machines echo through the shop until the artist calls out your name and it's your turn. Once you have your ink, it's yours for life. You love it - until you don't.

Maybe you inked yourself with a Chinese symbol in high school and have just now figured out it actually doesn't translate to "love". Maybe you've made the mistake of getting your ex'es name on your wrist. Or perhaps those crooked lines have made you realize that shopping around for the cheapest price wasn't the smartest idea for something that's permanent.  So what do you do when you've fallen out of love with your ink? One Quebec shop, and the couple who own it, has the answer.

Working from separate facilities a few doors apart in LaSalle, Robin Labreche and Maryam Majdi have the tattoo market covered. Robin is an international award wining tattoo artist with 15 years of experience and almost 50 awards to show for it. Maryam has a PhD in Pharmacology and Therapeutics from McGill, and was doing stem cell research in San Diego before moving to Montreal. Together, they own their tattoo studio, Dahlia Tattoos, and their laser clinic, Azalea.

This power couple, who are also engaged, want to educate Montrealers on how to make an informed decision when it comes to tattoos and tattoo removal. They approach the industry differently than most other technicians: Their main goal is to educate you. And needless to say, they know what they're talking about.

What's different about them? Well, apparently the tattoo removal business can be riddled with misinformation. Some technicians might make false promises to lead you in, and then if you don't get the results you were promised, they might blame it on you. These two take a different approach. Other than making education about the industry and procedures their main goal, they also guarantee what they quote you.

The fact that Robin is a tattoo artist also gives them an advantage over some other places that do laser removal, as a lot of people come to them to get their tattoos dulled down so they can get a cover up. The advantage of lightening your existing tattoo gives you many more options for a cover up that'll work and that you love - and Robin's often involved in consulting to give advice on what part of the tattoo, and exactly how much of it, needs to be worked on.

Thinking of getting your tat erased? Azalea is the place to do it. They're the first and only tattoo removal clinic in Quebec to own the Quanta Q Plus C laser system - the safest and most effective tattoo removal laser in the world.

It's also the only one approved by Health Canada and the FDA. It's a medical laser so it can remove any pigment tht's darker than your skin (tattoos, beauty marks, freckles, etc...). But before you turn your nose up at it because of how expensive you think it is, it's not the most expensive.

Dr. Majdi and Robin say that while they do have the best technology, they're extremely competitive when it comes to price. Plus, their machine is so effective that you'll ned significantly fewer sessions than anywhere else, which means less money overall. The couple, who have been featured on Breakfast Television and other local media, are honest and truly care about their results.

They've even turned away people who are too tanned because of the risk of something called hyper or hypo-pigmentation, which is the result of an increase or reduction in melanin production. They refuse to compromise their ethics for revenue.

So if you're unhappy with your ink and want to have it removed or covered up, or you just want some good, honest information about a decision whose results are permanent, Dr. Majdi and Robin are your people!

Visit their laser removal clinic at 7567 Boulevard Newman in LaSalle, Quebec or check out their website and Facebook page for more info.