Montreal's "Le BallPark" Is The Newest Place For Poutine & Meatballs 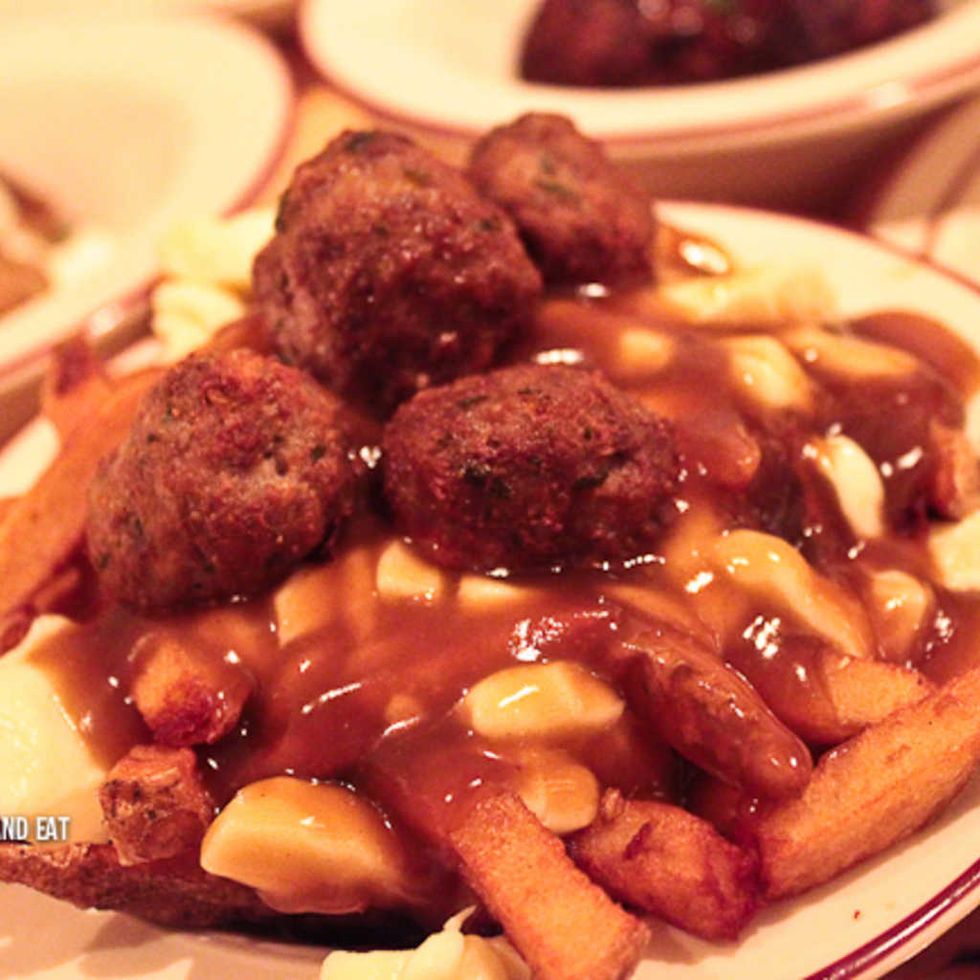 Opposed to my initial immature and infantile thought, Le Ballpark is not in fact a place to park your balls, but it’s the newest spot in Saint-Edouard where their claim to fame is serving up meatballs.

We had the lamb meatballs with their homemade tzatziki sauce. The meatballs were moist and were served three in an order. Lamb’s noticeably strong gamey taste was very present in these meatballs – which is probably explained by the fact that the meatballs themselves, though not undercooked, were slightly pink in the middle and roasted to a medium.

Neither my girl or I mind the taste of lamb, but I can see how the overt taste may be a bit too forward for some people. The yogurt sauce was a lot creamier than the tzatziki that I’m used to. Cool to the bite, the tart sauce highlighted the meatball and provided the overall classic familiar flavour combination.

We also ordered the BBQ pork meatball. When I read it on the chalkboard menu, the Chinese in me got excited at the idea of BBQ pork in the form of a meatball, but I fantasized too soon. In fact, the order was four globes of pork meatballs covered in a BBQ sauce – I knew the idea of cha siu meatballs was too good to be true (cooks and chefs out there, take note! Cha siu meatballs! Make it a thing!)

Deceivingly moist, the meatballs were a tad dry on the outside that any amount of sauce couldn’t have helped soften the ‘crust’ that formed, but flavour inside was pleasant.

We ordered the “Polpoutine” from the appetizer menu to eat as a side. A pretty much straight forward poutine, handcut fries, gravy, squeaky cheese curds topped with beef meatball nuggets.

The other side that we ordered to go with our balls was the “macaroni à viande.” A baked gratinéed macaroni in meat sauce dish that scared the lactose intolerance out of me.

Maybe I’ve been spoiled to think that anything other than tangerine sized meatballs (from having way too much Italian food in my life) is lesser meatball. Modest in size, Le Ballpark meatballs could have used the help of larger hands in the production process. We were told that the meatballs change weekly and as explained, their repertoire of meatball recipes is longer than the White House petition to deport Justin Bieber back to Canada, so I would be open to returning in the future to see what other kinds of meatballs make the roster as well as a cast of further inspired side dishes.