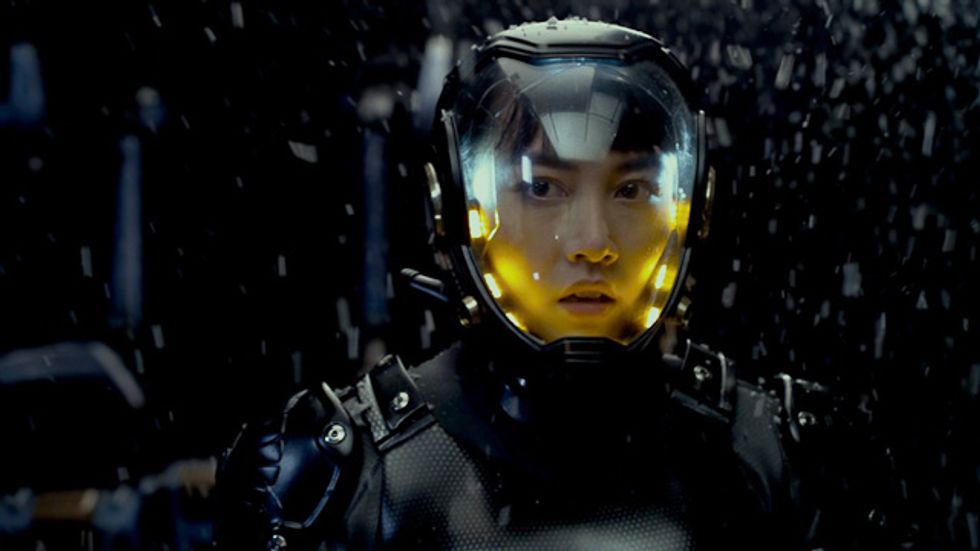 With theaters saturated with end of the world and post-apocalyptic films this summer, it’s nice to know the genre can still be fresh and entertaining, while simultaneously being familiar.

Director Guillermo del Toro’s (Blade II, Hellboy, Pan’s Labyrinth) newest brainchild is Pacific Rim, a call back to the Japanese monster flick of old, with a strong influences from 80’s US action movies. The story is simple: One day gargantuan monsters, called the Kaiju, begin crawling out from the Pacific Ocean’s depths and attacking major cities worldwide. As one Kaiju falls, another takes its place elsewhere in the world within months. With deaths and damages piling up, as well as constant exhaustion of military resources, all the world’s nations put aside their petty differences and unite (awww). The result is the Jaeger program. Jaegers are essentially giant mech robots, piloted by two humans, in an attempt to level the playing field and give the human race a fighting chance.

The one thing that still resonates days after seeing the film is how perfectly they nailed the scale of these massive creatures (both the monsters and robots). Whether it’s using people as devices to display a scale ratio, or having the “fighters” pick up objects that would be huge to us, seem realistically small to them, and look to have a weight that makes sense.

The story is actually interesting, here’s a lot more to it than just monsters swimming up from deep beneath our ocean floor. The Jaegers are also quite awesome and have a syncing feature required between the two human pilots which, when not successful, can lead to an “Inception” type of effect. Don’t want to give more than that away, so just go with it!

Idris Elba(Prometheus, The Wire) steals the show as the Jaeger program’s commanding officer. He’s a friend when he needs to be, but he can be vicious and epic as well. The film’s main protagonists played by Charlie Hunnam (Sons of Anarchy) and Rinko Kikuchi (Babel) actually to a decent job of creating chemistry, and not the sappy love kind, an actual combat-ready brother-in-arms type of connection.

All in all, this is a pure action film through and through. Not once does it try to be some existential story about human morality or anything else beyond a fight for survival between giant robots and giant monsters. And although we throw this word around freely these days, this movie is EPIC. It will have some cheese, it will follow the action flick mold, but while this may affect some people’s liking of the film, that’s exactly what del Toro intended. You will sit at the edge of your seat, cheer, and feel like a kid again at what is so far the most fun you'll have at the movies this summer!

+Fun As All Hell