Plastic Roads Are The Answer To Montreal's Pothole Problem

It's like a real life Hot Wheels track.
Laura Hanrahan 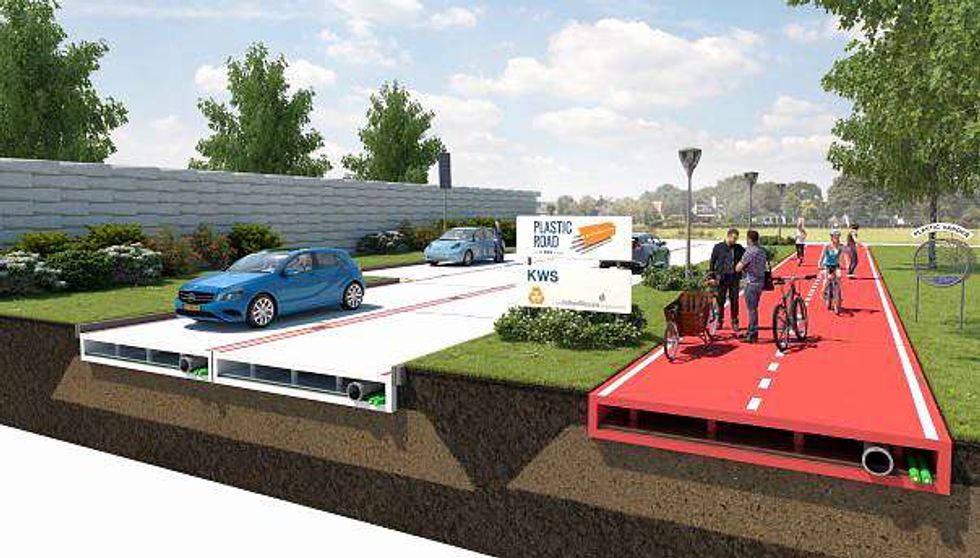 There's nothing more frustrating than driving down a Montreal road and feeling like you're constantly veering in and out, trying to avoid all the potholes. The winter isn't kind to our streets and it usually takes quite a while to repair all of the damage that it does. But thanks to a Dutch company called VolkerWessels, pothole ridden asphalt roads may soon be a thing of the past.

VolkerWessels has designed a plastic road that is so durable it can easily survive temperatures as low as -40 degrees and as high as 80 degrees Celsius. These plastic roads can last three times as long as a normal road (potentially up to 50 years) and are unaffected by corrosion, which would mean less upkeep and, thankfully, less traffic due to construction.

Not only will the roads make driving easier, but they'll also be better for the environment. VolkerWessels' designs involve using 100% recycled plastic, salvaged from oceans and incineration plants. Plus, once a road needs to be replaced, its material can be reused in making a new road.

The roads are made up of interlocking pieces - much like lego - which can be crafted beforehand and then easily laid into place. This also means that areas for sensors and traffic lights can be built into the roads before they've even left the factory. And on top of that, the insides of the road pieces are hollow to allow for easy pipe and cable laying.

The city of Rotterdam in The Netherlands has offered VolkerWessels an area of a bicycle path to test their roads, which is set to take place over the next 3 years. If it all goes off without a hitch, we may (hopefully) soon start to see these plastic roads cropping up all over the world.

For more information check out the VolkerWessels official website.