The hero you voted for. 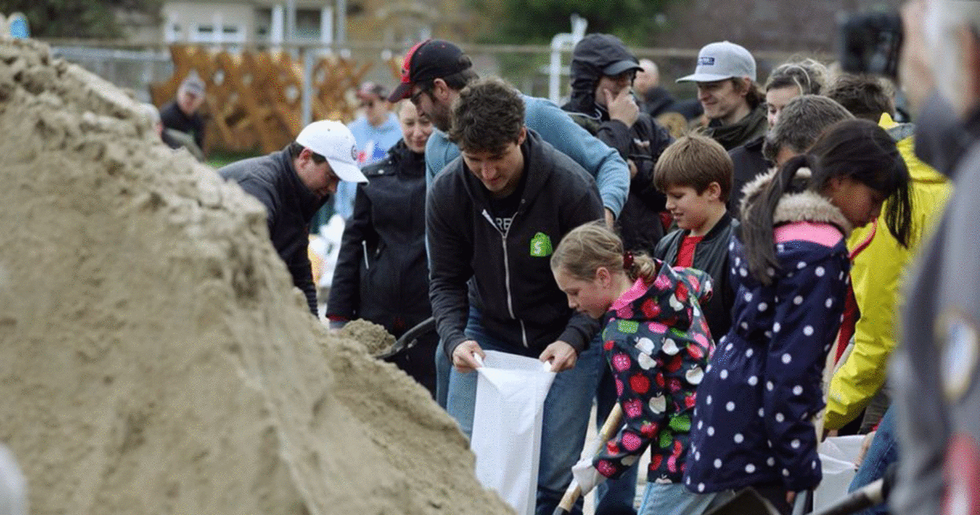 Montreal is currently in a state of emergency due all the flooding. In case you want to stay up to date with the latest information, you can find it all by clicking here.

But since everyone else is talking about the bad news, we thought we'd bring you a bit of good news to balance things out.

It's about how awesome our Prime Minister is. When disaster strikes, he doesn't just hold a conference to give a nice speech, he rolls up his sleeves and he helps out.

Friends & neighbours, civilians & soldiers coming together to help those affected by floods. Inspiring to see it in Terrasse-Vaudreuil, QC. pic.twitter.com/BbvAKS8yX2

Last night Justin was in Terrasse-Vaudreuil so help those who were affected by the flood.

But unfortunately for our readers, he kept his shirt on.

Plante Told Trudeau She Wants A Nationwide Ban On Handguns

"Canada needs to be a country that distinguishes itself from our neighbours to the south."

At an early morning meeting between re-elected Mayor Valérie Plante and Canadian Prime Minister Justin Trudeau at Montreal City Hall on Friday, housing, public transit, the pandemic and most notably, public security in the city were the main topics of discussion.

Montreal's mayor once again implored the federal government to consider banning handguns across the country.

There was some serious drama at the National Assembly. 👀

Things got heated at the National Assembly of Quebec's question period on Wednesday when Justice Minister Simon Jolin-Barrette called Liberal MNA Marc Tanguay a "conspiracy theorist" — a comment he later apologized for over text.

The drama started when it was time to debate the renewal of the state of health emergency.

Canada's Vaccine Passport For Travel — Everything You Need To Know

And how it works if you live in Quebec.

We now have another vaccine passport in Canada. The "Canadian COVID-19 proof of vaccination" — widely dubbed the federal vaccine passport — is a standardized document for use in domestic and international travel.

Quebecers can download this federally-approved pass in addition to the provincial VaxiCode app and proof of vaccination record to access services that are restricted to fully vaccinated people.

It will give $300/week to eligible workers who can't work because of a lockdown in their area.

At a press conference on Thursday, Prime Minister Justin Trudeau and Canada's Deputy Prime Minister and Minister of Finance Chrystia Freeland announced a series of new programs and COVID-19 benefits that will replace the current Canada Recovery Benefit (CRB).

Freeland said the programs will include "more targeted measures" in contrast to what she called the "very broad-based support that was appropriate at the height of our lockdowns."