Ah, Timmies. While for most of us the coffeehouse nothing more than a stop on a roadtrip, for others the Canadian landmark is now the location of their most shameful moments. Particularly if those moments were caught on video, below.

Though not all the videos below are outrageous or disgusting. There is a baby moose involved, so not all hope is lost.

Here is a hilarious compilation of the most ridiculous caught on video at Tim Hortons locations across Canada.

TL;DR The Canadian coffee staple is known for more than just their Timbits and double-doubles. The coffeehouse has the tendency to attract some of Canada's most interesting characters. Below are 7 of the most ridiculous and hilarious moments caught on video at Timmies across our great nation.

Baby Moose Stops By For A Visit

This sweet little moose was rescued from the side of the highway in Northern Ontario.

Clearly, the man who found the baby moose knew there was only one place to take the wee Canadian treasure: Tim Horton's.

Snake Thrown Over The Counter

The incident occurs right at the end of the video, though the entirety of the video is hilariously Canadian.... in the worst possible way.

In this video, you can see the douchiest dude to ever order an ice capp... I guess they made a mistake because he was not impressed.

This is one of many incidents that took place in B.C... must be something in the water.

This infamous video shows a woman throwing her own feces inside a Tim Horton's  Langley, B.C.

Reports imply that she was denied access to the washroom, which was why she was able to go so swiftly.

In the video above you can see the violent assault of a Tim Horton employees at the McVean and Castlemore Rd Timmies location in Brampton, Ontario.

According to reports,  the woman climbed through the drive-thru window, because she was also denied access to the washroom.

I think this is why they now let anyone just go ahead these days. This shit just ain't worth it.

Moose Ready To Start His Shift 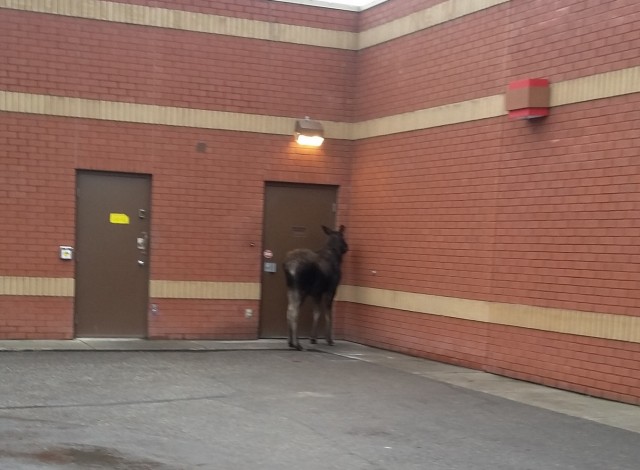 A Moose waiting by the back door of a local Tim Hortons yesterday in Canada.

This polite moose was caught just waiting for his shift to start outside this local Tim Horton's.

There are no details on which Tim's location this happened at but wherever it is... is where I want to be.

Asleep in the Drive-Thru

This police car dash cam shows a man who didn't make it to the drive-thru quick enough in Aurora, Ontario.

His lack of caffeine won out before the Timmies employee could pass his coffee through the window.

York Region Police eventually had to break the window of the car to wake up the man inside. He was inevitably arrested for intoxicated driving after blowing four times over the legal limit.

Spotted something silly or suspicious at your local Tim's? Send us a video to our Facebook or Instagram @MTLblog.