The 10 Types Of McGill Students You'll See In Leacock 132

#2 The person with all their friends' clickers.
Laura Hanrahan 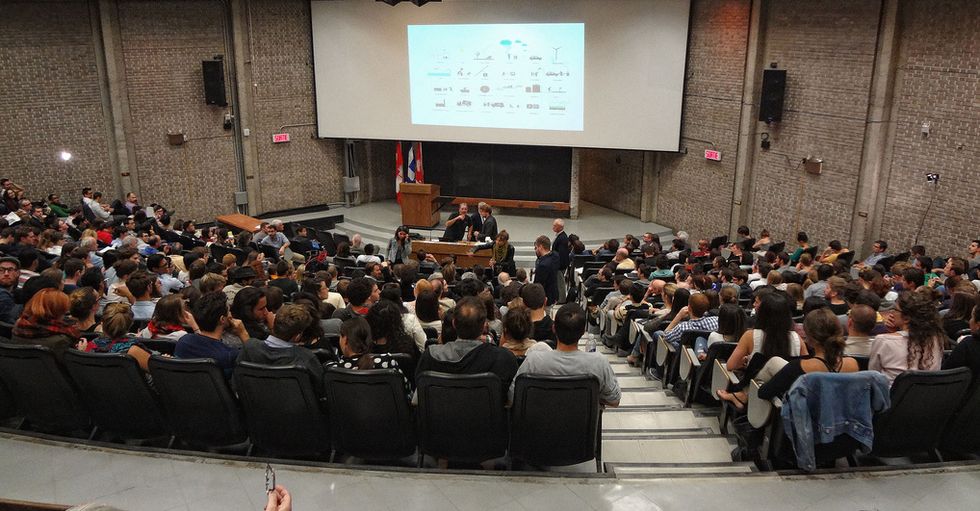 Leacock is the biggest lecture hall at McGill University, seating 600 people. It's virtually impossible to make it through an undergrad degree there without having at least one class in this monstrosity of a room. It's where the university likes to put all of those massive first-year required courses, and of course the very popular student favourites like Natural Disasters and Terrestrial Planets.

Due to its enormous size and the fact that McGill is always riddled with a variety of characters, you can pretty much be guaranteed to run into these 10 specific people when you go to class in Leacock 132, that is, if you do go (I get it, it's recorded).

1. The beyond confused first-year

They're usually somewhere near the front of the room, asking questions like "How do I get onto the course website?" and "What will be on the midterm?"...chill out dude, it's September.

2. The person with all their friends' clickers

Sure, it's technically against the rules, but don't deny that you've never handed off your clicker to a friend when you needed those participation grades but maybe were a little too hungover to make it to class.

I have yet to have a class in 132 where there hasn't been someone in a full-on McGill Baseball uniform having to embarrass themselves for hazing by yelling something out in the middle of the lecture. And while it may suck for them, it's pretty entertaining for the rest of us.

4. The Person Who's Just PTFO

I get it, the lecture's recorded. No judging here. Class time needs to become nap time once in a while.

Fourth-years who are in need of filling an elective love to take the classic Leacock 132 classes. They're pretty easy to spot - just look for the people at the back of the class not giving a shit.

Without fail there will be someone eating during class,and without fail it will be pungent AF. Get ready to smell a lot of Subway and samosas.

Usually found directly in front of the podium, about as close to the professor's face as possible, this person tends to think that all 599 other people would love to hear their "insightful" questions every other minute. The "if you have a question, somebody else probably does too" rule doesn't always apply.

8. The Person In The Aisle Seat That Won't Move

It's a 600 person lecture hall and, for the first few classes at least, it's pretty packed, yet there's always someone who gets there early and plops themselves down in an aisle seat and refuses to stand up when people try to get by. Just move to the centre!

Every so often McGill tours will make a stop in Leacock classes and you get to watch as the tour kids stare in awe at how awesome having class in a room like that must be.... If only they knew.

10. The Person Who's Too Damn Tall For The Seats

Having a class in Leacock is akin to sitting in the back row of an awful coach seat on a plane. If you're over 5'10, or just have long legs, your only saving is going to be getting a front row seat (or one of the like 3 in the very back with nothing in front of them).