The Delectable Poutines And Meats Of 'Lucky's Truck' 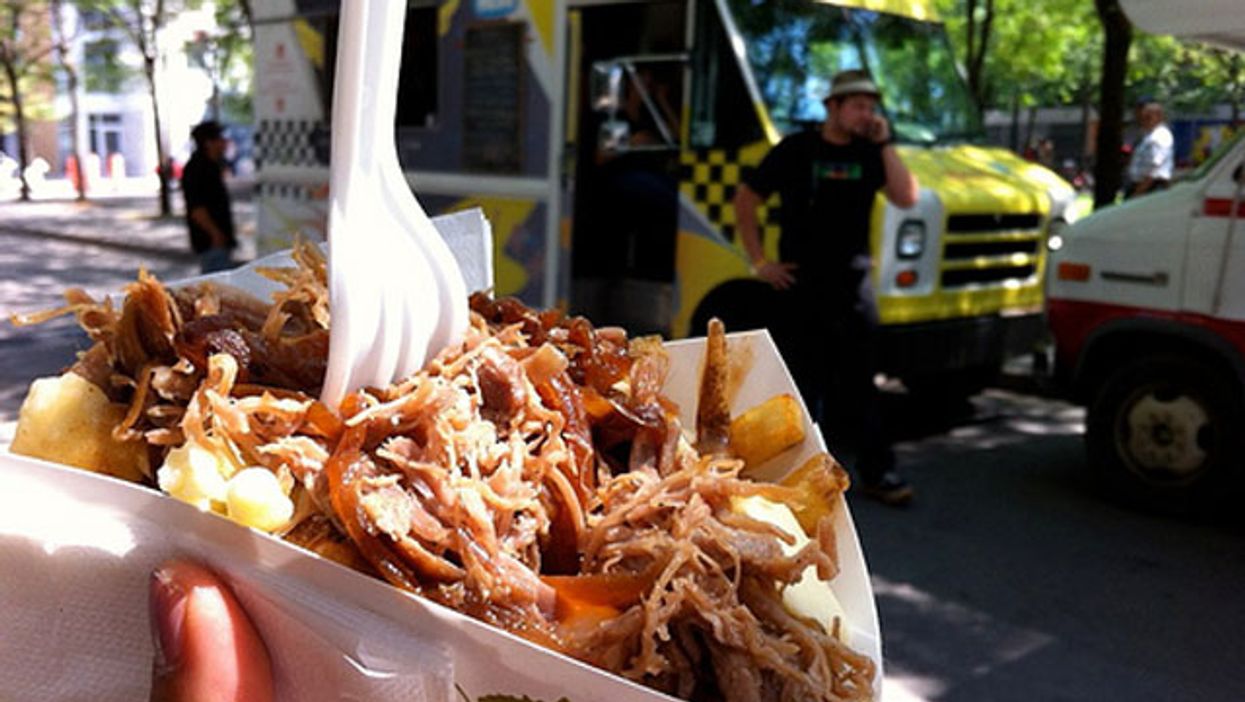 Food trucks are the hottest thing on the Montreal Summer food scene, and with so many options, its hard to know which are the most delicious choices. Sure, you can wait 'til the upcoming Food Truck Festival this weekend or, look to MTL Blog for ongoing coverage of the many delectable options found in the streets of Montreal.

'Lucky's Truck' is one example of a food truck you do not want to miss out on tasting. Founded by Valerie Impala, Lucky's Truck is focused on bringing a modern flair to traditional Quebec meats and wild game. Impala was influenced by the many food trucks found in the rest of North America and decided to import the concept to Montreal, while still retaining local flavours.

The menu of Lucky's Truck is entirely inspired by local ingredients found in Quebec, a fact made apparent by the meats featured on the menu. Duck, rabbit, boar, and cheese, all native to Quebec, grace Lucky's Menu in the form of sandwiches, poutine, and other tasty treats. Meat eaters, don't stay up all night to get lucky 'cuz Lucky's Truck has your next meaty meal covered.

To get your stomach growling, Lucky's has some delectable meat-snacks. Taking the concept of 'meat on a stick' to a new level is Lucky's wild boar satays served with a drizzle of homemade roasted red pepper BBQ. If you're hesitant about what wild boar may taste like, do not fear. The wild boar satays are tender and juicy, and pair perfectly with the zesty red pepper sauce which adds the perfect amount of heat and spice.

Another snackable option, which is soon to be featured on Lucky's menu, are pulled pork and pulled boar donuts. While Lucky's is still working on perfecting the recipe, I have to say I was very impressed with this cool concoction. The shredded meat worked great with the fritter-like dough, both are soft and chewy and blend nicely together. Served alongside is Lucky's blueberry mayonnaise, a condiment that is simultaneously fruity, zesty, creamy, and smooth. An original sauce for an original snack.

Arguably the most popular dish on Lucky's menu, and for good reason, is the duck confit poutine. Not your standard poutine, this creation is five hours in the making before you even get to take a bite, as that is the amount of time needed to marinate, cook, and shred the duck meat. Drenched in a homemade foie gras and red wine gravy, this poutine is worth the time and effort. You can really taste the quality of meat, cheese, and gravy found in Lucky's premiere poutine. A must eat for all poutine lovers.

Aside from snacks and meals, Lucky's also serves up drinks and desserts. Lucky's original Lavendar Lemonade is refreshingly tart, and not overly sweet, with a light lavender undertone. To end the flavour adventure, try one of Lucky's ice cream sandwiches, or their homemade honey-lavender whoopie pie.

Looking ahead, Lucky's is looking to have their very own restaurant by the end of the summer, to go along with the food truck. Until then, check out Lucky's daily schedule here and go get lucky!