The Medea Effect: A Montreal Play That Cuts Right To The Bone 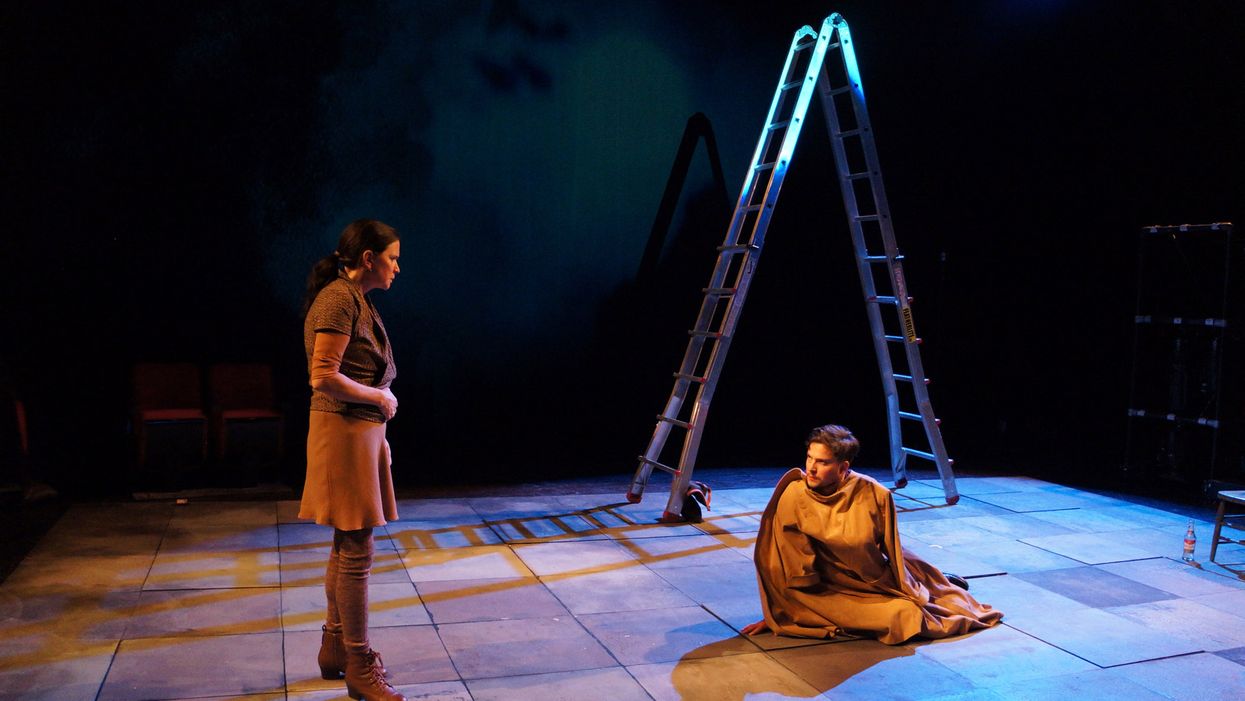 It’s not often that a play so stripped down and bare can so effectively capture our attention in an age full of distraction. It takes some pretty powerful performances to carry the weight of the heavily loaded themes presented in The Medea Effect without the aid of elaborate sets, multiple costume changes, and special effects we have come to expect these days, but actors Jennifer Morehouse and James Loye brilliantly deliver so much raw emotion and grit, you will feel it in your bones.

In the Medea Effect, Ada is a woman tormented by her demons, who shows up to audition for Eurypedes’ Medea, the classic Greek tragedy of a mother who brutally slaughters her children to avenge her own heartbreak. Uninterested in listening to Ada's audition,  director Ugo, attempts to dismiss her, but is soon drawn in by her tenacity, as parallels begin to be drawn between not only Medea herself, but his own afflicted past. As the two characters begin to chip and scratch away at each other’s hardened facades, we slowly begin to uncover the horrifying truths that lie beneath the surface of their reality, but also our own.

Designer Lyne Paquette drives the play’s themes of despair, dislocation, substance abuse and profound loss even further by underscoring poignant moments with subtle soundscapes and visual projections juxtaposed with the bare bones of the lonely stage. The Medea Effect slowly builds on its dark tones and moods until finally brought to the bone-chilling climax, effectively drawing the audience into the very depths of the characters’ inevitable unhinging. Everyone, from actor to viewer alike, is left marked, as though they've just barely managed to come out the other side.

This is pure acting at its finest, nothing more nothing less, and is the perfect example of why the live stage remains such a tangible form of art.

When it comes to supporting Indigenous creators, the best place to start is by educating yourself, says Rebekah Elk, a.k.a. @mocassinmama, an Anishinaabe woman from Chippewas of the Thames First Nation and a moccasin maker.

The land known today as Canada is home to diverse Indigenous communities, with a wide range of cultures and forms of visual expression.

Social media is a great platform to educate others on different groups and cultures from around the world. And that's what Shina Novalinga (also known as Shina Nova), an Inuk woman from Montreal, is doing. With 264k followers on Instagram and 1.5m followers on TikTok, Shina is reaching people and teaching people all about the Inuit culture and the richness and beauty that comes along with it.

Offering education and a space for conversation on her platform, Shina lists her bio as a "Proud Indigenous" and her pages are a true reflection of her pride.

The discussions of inclusivity and racial diversity have definitely come to the forefront in the last year more than ever before. But what does it mean for the children of today and future generations?

Two Montreal dads decided to take that answer into their own hands and start YMMA, a company that makes dolls from Africa to help introduce children of African and non-African descent to these topics from an early age.

If there's one good thing to come out of 2020's mostly indoor lifestyle, it's that the world is finally hopping aboard the K-drama train.

With cliffhangers in nearly every episode, swoon-worthy romance scenes, intense plot twists, and a promise of at least one love traingle (or square) per show, Korean dramas make for some of the most addictive viewing on Netflix. And don't even get us started on the scenery.