You will cheat on your diet. 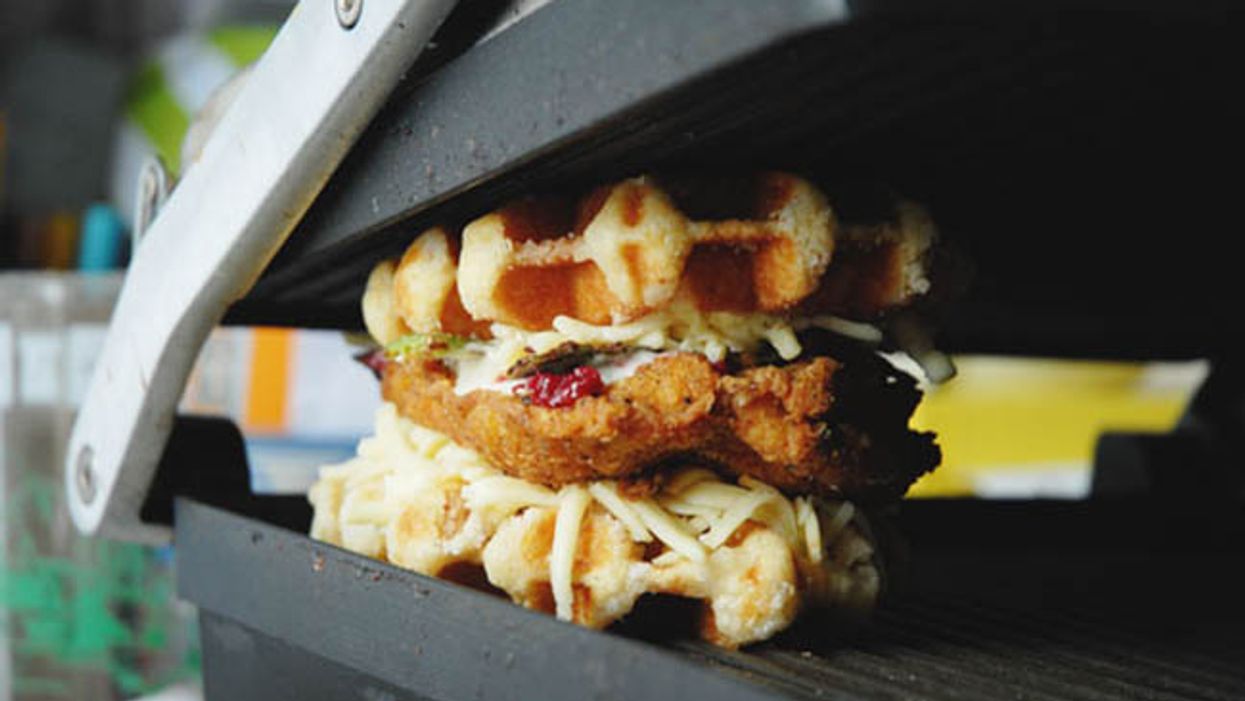 In case you didn't know, November is Grilled Cheese Month in Montreal. Seems like something we'd just make up and say, though it was actually two seperate Montreal resto's (Le Cheese & L'Gros Luxe) who deemed November the month of grilled cheese, and we're totally going along with the declaration. To celebrate the cheesiest month of the year in a brand new and artery clogging way, with the Fried Chicken and Waffle Grilled Cheese by GrilledCheeseSocial.com.

Adorably titled "The Fry Baby," Grilled Cheese Social's new creation features two Belgium waffles, smoked Applewood Fontina cheese, grilled okra, fried chicken breast, pickled cherries, and a bit of ranch dressing for 'dat creaminess. Not only is that the most enticing ingredient list we've seen in recent memory, we have to say, Grilled Cheese Social is the coolest name for a website. Actually though, there should be a Montreal bar by the same name.

The Fry Baby comes together pretty much how you'd think a grilled cheese would, though we're going to show you the step-by-step photos anyway, because the process is poetry in motion. Well, not motion, because they are still images, but you get what I'm saying.

See the birthing process of The Fry Baby in the pics below, and be sure to head over to the original recipe here.

First, cheese up your waffles. Don't skimp on that fromage, not that you would.

Throw on your crispy fried chicken. Now we're getting started.

Lather up your chicken with some ranch sauce, then top with the pickled cherries.

The final addition: the grilled okra, for some classic southern flair.

Top it all off with the second waffle. We're nearly there.

Put the 'grilled' in grilled cheese and, you know, grill the thang. Or just use a panini press, same diff.

Are you looking for more? Click here for This Is The Pierogi Grilled Cheese Sandwich >

So much melty goodness!
jacksonian.democracy

There's literally nothing in the world better than cheese. When you really think about it everything good comes with cheese on it: cheese pizza, mac n' cheese, grilled cheese, cheese burgers, cheesy burritos and sooo much more!

These will make your heart melt!
meltedtruck

I am not too sure if you are all ready for this... I suggest making sure that you have a nice glass of water next to you because your mouth will literally be watering before, during, and after you read this! Montreal sure is known for their amazing poutines but let's be real... Their grilled cheeses are even better!

READ ALSO: Everything You Need To Know About Canada’s 150th Birthday But Were Too Afraid To Ask

A celebration of the world's best comfort food.
NDTV

Is there anything on this earth quite like a tasty, gooey, piping hot grilled cheese?

Comfort food at its finest.
mandy.eats

Friends, I don't know if there's such a thing as the world's most perfect food, but if there was, it would totally be macaroni and cheese.

Not only does it feature pretty much the two best ingredients in the world - cheese and pasta, let's not kid ourselves - but it's also the perfect base. Although it's incredibly gooey and tasty on its own, you can dress up mac and cheese pretty much however you want and create something on a whole other level of complete awesome.