You're sure to laugh till your gut bursts in half.

Montreal has tons of amazing summer festivals, but Just for Laughs very well may be our favourite. The festival's lineup is always stocked with hilarious performers, and this year is no exception. It's hard to go wrong with any of the comedians, but we've listed the cream of the crop for you. Here are 15 Just for Laughs shows you shouldn't miss. He’s one of the word’s most popular comedians, selling out arenas everywhere he goes, and he’ll be performing during Just for Laughs. Ansari cracks up audiences with his pop culture references and hysterical digressions. You have to see his frenetic delivery in person to understand its greatness.

If you’re a fan of “Dick in a Box,” (and, let’s be honest, who isn’t?), you’ll have to check out this show. The Lonely Island member and former SNL star will be bringing his lovable brand of off-beat comedy to the festival. He’s hosting a gala, which’ll also feature hilarious performers like Noel Fielding of The Mighty Boosh.

Closing out the festival will be one of the world’s most popular comedians. He was the first comedian to sell out Toronto’s Air Canada Centre, and it’s not easy to understand why when you hear him perform. He’ll be hosting a gala alongside a killer lineup of comedy heavyweights like Ruben Paul and Wil Anderson.

This comedian found himself a wider audience two years with the release of his movie Sleepwalk with Me, but he’d been quietly killing it as a touring performer for years before. Birbiglia will be bringing his brand new one-man show, Thank God for Jokes, where he tells personal but highly relatable stories (as he often has). His deadpan delivery and stunning storytelling are not to be missed.

If you like your comedians angry, you’ll definitely want to catch this show. The iconic comic will be performing his latest show, titled “The Rant is Due,” and you can be sure that there will be lots of yelling. However, he never lets his rage get in the way of his insight, and he always delivers a top-notch performance.

Serious comedy fans won’t want to miss this comic, because he’s nothing short of a legend. He’s been making us bust a gut since his early SNL days, and he’s managed to keep up his incredible comedy chops over the years.  He’ll be hosting a gala featuring other can’t-miss performers like Mike Birbiglia and Marc Maron.

If you want some lulz about love, you’ll want to check out this comedian’s show. He’ll be hosting Date Night: The Relationship Show, a series of sets by hilarious performers like Lynne Kopitz, all of whom will be riffing on sex, relationships, and more. Godfrey has torn it up at the festival the past two years, and there’s no reason to suspect that this year will be any different.

Can you really resist the opportunity to see Ron Swanson in person? If you’re anything like us, the answer is a resounding “No.” The Parks and Recreation star will be appearing as the host of Talk of the Fest shows, featuring conversations with world famous comedians like Seán Cullen. No word as to whether or not he’ll be in character, but we can dream.

You’ll get a taste of down home American comedy if you check out this performer’s show. After finding massive success as part of the Blue Collar Comedy Tour, White continued to reach audiences with a Grammy-nominated album and a bestselling book. His trademark vulgar and sarcastic style has to be seen to truly be appreciated.

This internet sensation has garnered over 60 million views on YouTube, and it’s not hard to understand why. She hilariously parodies self-important singers with her ruthlessly satirical videos. As funny as her web links are, they can’t compare to her live one-woman show, which she’s performed in huge cities around the world and will be bringing to the festival.

If you’re not watching this comedian’s show, Inside Amy Schumer, you’re missing out on some of the funniest sketch comedy on TV, and we can only imagine that seeing her in person will be even better. She’s insightful, witty, and, most importantly, flat-out hysterical. She’ll be hosting a gala with other incredible comedians, like the Montreal native Deanne Smith.

This comedian has achieved massive success recently with his hugely popular podcast WTF with Marc Maron, but his standup act is equally worthy of attention. For over 25 years, he’s been traveling the world and cracking audiences up with his hilarious stories. The festival is as good a chance as any to see this comedy legend.

The hilarious star of movies like Knocked Up and Pineapple Express will be performing live, and you’ve got to see it. He’s hosting a charity gala with his wife, Lauren Miller, and the proceeds will be going to their “Hilarity for Charity” fund, which helps Alzheimer’s patients. He’ll be supported by amazing comedians like Jim Norton and Jerrod Carmichael.

This comic is incredible in person, but don’t take our word for it—he was recently named Best Concert Comic at the 2014 American Comedy Awards. He riffs on topics like obesity, laziness, and fatherhood, and he brings a fresh perspective to them. He’s hosting a gala featuring the legendary Dom Irrera and others. 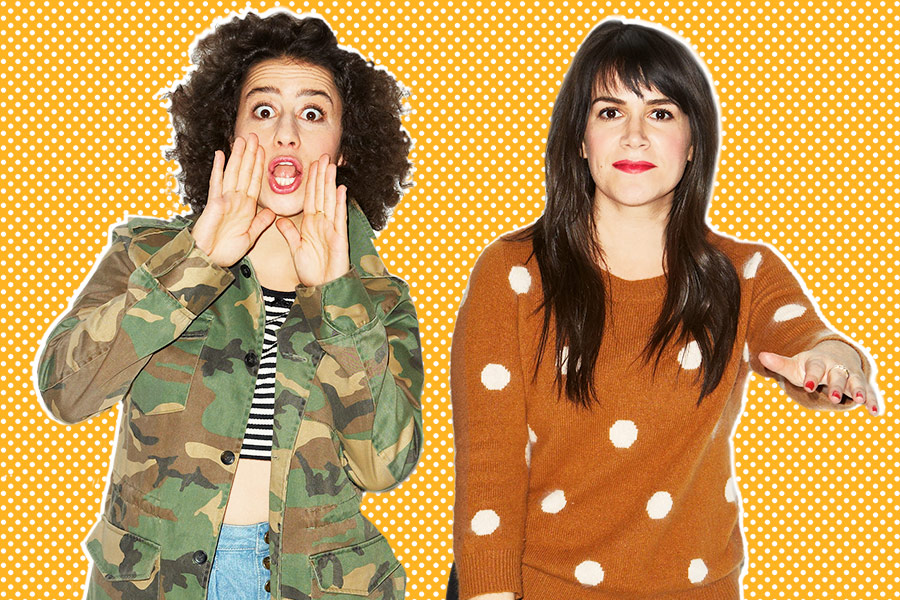 These two friends recently became TV stars thanks to the success of their web series, and now they’ll be performing live at Just for Laughs. They’ll be hosting Talk of the Fest shows, a series of conversations with amazing guests like the Toronto-based comedian and musician Darryl Orr. Their quirky brand of humour will surely be a welcome change of pace at the festival.

Thirsty after the show? Click here for the 10 Montreal Bloody Caesars You Should Drink At Least Once In Your Life >