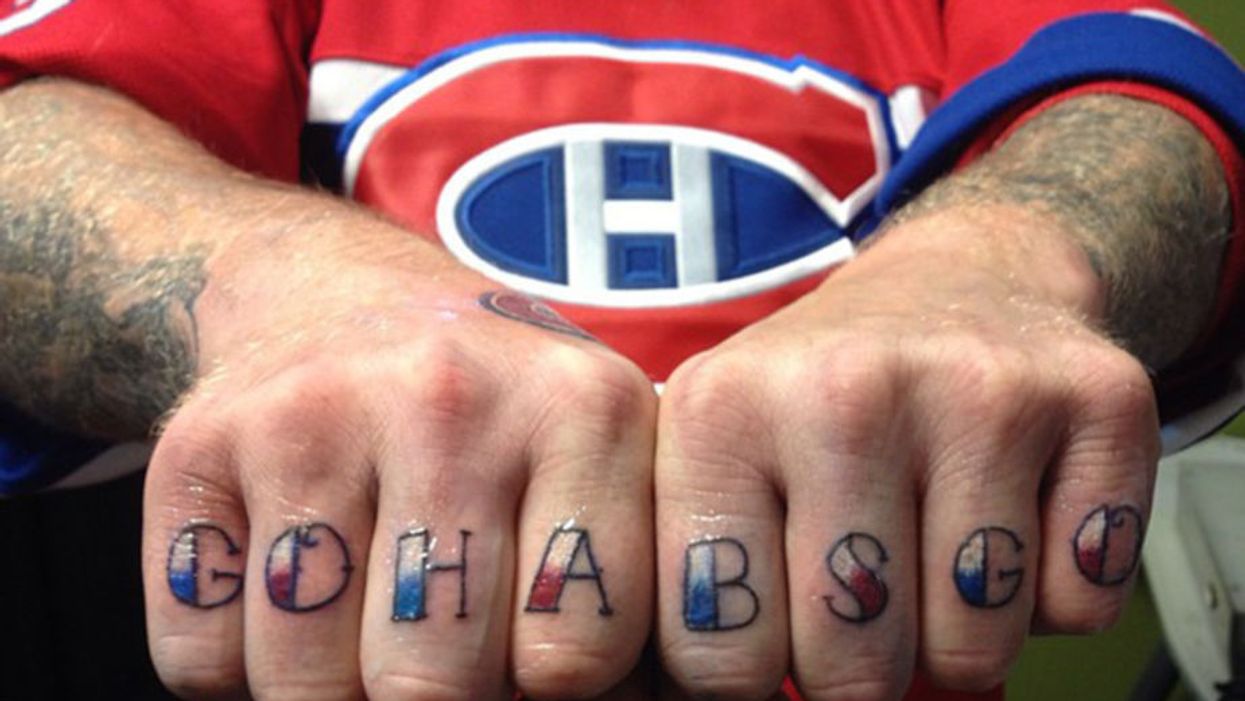 If I were to rank levels of fan intensity (fan-tensity?), people who are willing to literally tattoo their team on their skin would rank pretty high up there. Here's 25 pieces of photographic evidence that the old joke is true: "Hockey isn't a sport. It's a religion."

Not sure what the symbolic significance is. But because scales normally mean justice, I think it means that winning a Cup is only just.I WANT A REALLY OPTIMISTIC FAN TO PUT "2015" PRE-EMPTIVELY ON THEIR TATTOO CUP BANNER. If you know anyone who has done so, please send it to MTL Blog immediately.It's only temporary, but points for Keith Hobbs because he is actually:This is not a tattoo you find on lesser mortals. For one thing, most people don't have the bicep space.If only my knuckles didn't already spell out "THUG4LYFE", I would do the same.

(Just kidding. My knuckles do not spell out anything to do with thugs, or their lives.)

Feel like hockey would exist in the afterlife, to be honest. #religionSome non-Habs fan is going to see that and be like "... so you're really into French poetry and the Olympics, huh."10/10 for creativity. DAMN.I love the tattoo, but I also love how the dude clipped up his sleeves with binder clips. Didn't know MacGyver was a hockey fan with sick tats.To the owner - please one day drive down the new Pont "Maurice Richard" while wearing a sleeveless shirt, arm carelessly slung out the open window, speakers blasting the Habs goal song.

Please. Do it for all of us.

...I don't even have a funny caption for this. Too amazing.

WHEN YOUR BURN IS SO SICK THAT YOU LITERALLY TATTOO IT ON YOUR ARM TO TROLL LEAFS FANS.

When you're 100% a Canadiens fan, inside and out.But like, actually.I always picture someone actually throwing me a torch, and I have to catch it, like one of those Cirque de Soleil performers who casually throws six torches up and starts to juggle them.Add a mountie on a moose into that photo, and we may have found the most Canadian thing to ever exist.Skull and crossbones? Nah, man.Apparently this fan got it for their grandma, who passed away earlier that year and was a major Habs fan. Awww.Eyes on the prize.P.K. Subban's next Halloween costume.

Looking for more? Click here for 15 New Montreal Bars To Watch A Montreal Canadiens Game At Least Twice This Season >