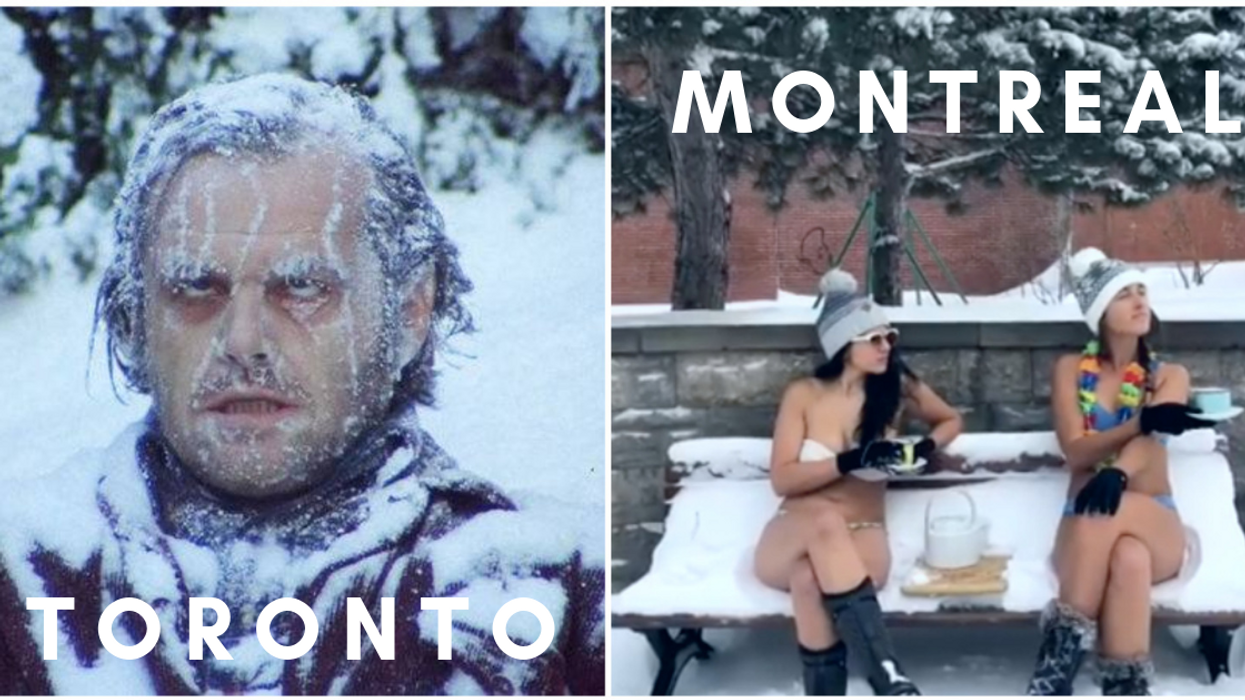 Most Canadians across the country spend the winter commiserating about subzero temperatures, biting windchill and insane amounts of snow... aside from the West coast, of course.

But not all cities face the same struggles. And Toronto's most recent storm has people in Montreal cracking up at what Torontonians see to be a serious overreaction.

READ ALSO: WOW Air Is Giving Away Free Flights From Canada To Iceland For Valentine's Day 2019 If Your Name Is Valentin/Valentine

TL;DR While Montrealers revelled in the snowfall last week (as seen in many videos below), Torontonians have been freaking out over their storm today. And it seems that people in Montreal are starting to think it's pretty hilarious. Most of these Tweets are from the last week, when both cities experienced pretty heavy snowfall. A few Tweets from winters past, however, demonstrate that this is an ongoing rivalry.

Winnipeg obviously wins for the coldest place on earth on a regular basis... and the windchill in Toronto can be terrible when it's coming off the lake.

So that leaves the snow to Montreal. We get a lot and instead of getting annoyed, we get into it, as seen by the tweets and videos below.

While Torontonians were losing their cool today due the all the snow, people in Montreal couldn't help but roll their eyes..

And as many of these Tweets from over the years show, this is a perennial situation — Torontonians freaking out about a minor storm and Montrealers laughing at their misery.

Toronto reacts to a snow storm and people from Winnipeg and Montreal just gotta chime in, like we get it you live in hell chill

It could be in part because we had our own insane storm just last week, and most people handled it really well.

In fact, Montreal seems to come to life in a stormstorm.

The difference between Toronto drivers and Montreal drivers in the snow:

Montreal driver: "YEE HAH! LET'S MAKE SOME DONUTS AND SOME ONE EIGHTIES TABARNAK!" 🤣

#Toronto under a special weather statement, cancellations, armageddon. Uhm, because it's sunny out? #onstorm So embarrassed. Had 20cm of snow fall while making my ☕ in #Montreal and no warnings. pic.twitter.com/a2CuCf8UWf

Not only do we revel in mass amounts of snow, but we also don't have very high expectations for any of our public services.

So when the plows don't show up, most people aren't very phased.

Man on Church St looking at snow & yelling into phone “this is Toronto not Montreal!”

Hopefully so. It's terrible how the traffic just falls apart at the sign of any snow in Toronto. We need some of those fearless Montreal cabbies here, show them how it's done! Isn't that right @AlloccaMirella pic.twitter.com/CNpxNJWHxO

It helps, too, that snow tires are mandated by law here.

So there's no getting out of making sure your car is equipped and ready for even the slightest snowfalls.

Wow Toronto...3cm...be safe...don’t get any snow on your jean bottoms. Stay in the basement and stay off the phones. #snowstorm #montreal #Toronto #WinterStorm #snowto

And it's not like Toronto didn't get any snow — it was a record snowfall for them.

Over 24 cms of snow in as many hours... even as a Montrealer, that's pretty impressive.

So this is the "snowstorm" almost everyone is freaking out over. It's freezing out at -18. Just dress warmly and you'll be fine. The snow isn't that bad but I'm from Montreal. @ Toronto,… https://t.co/rptCrilrGj

Though we're about to receive our share of the storm this evening, so tomorrow morning is guaranteed to be interesting.

I'm assuming Montrealers will respond in fashion, though, as many of these videos show — the snow really doesn't scare us.

I shoveled 43 cm of snow TWICE in #Montreal so if any wuss in #Toronto tells me about their "vicious storm" they're getting a sand job.

If anything the snow provides and opportunity to get crazy, dive in and act like a child.

Or otherwise, stay in, snuggle up under some covers and pick your next binge on Netflfix.

The snow also brings out the creative side in us. The problem solving side.

Also the "screw it I'm going to skate in the street" side.

And that side is a beautiful thing.

So, if anything, Montrealers should take it easy on Torontonians today.

Instead, invite them to see the snow the way we do: as an opportunity, not an obstacle.

20 cm snow hits Toronto they call it a storm and freak out, 20 cm snow in Montreal is just another day in spring.

Hopefully, our Torontonian brothers are doing okay over there.

We know they can get easily overwhelmed with the snow and the lack of sidewalk plows (a story for another day), so all we can do is set a good example and hope they figure it out.

Hey #Toronto, just pretend you are in #Ottawa or #Montreal today. #snow

The question is, what is Montreal going to look like tomorrow?

So this is the "snowstorm" almost everyone is freaking out over. It's freezing out at -18. Just dress warmly and you'll be fine. The snow isn't that bad but I'm from Montreal. @ Toronto,… https://t.co/rptCrilrGj

And if you know a Torontonian, invite them to spend the weekend in Montreal this winter so you can show them how we handle things over here.