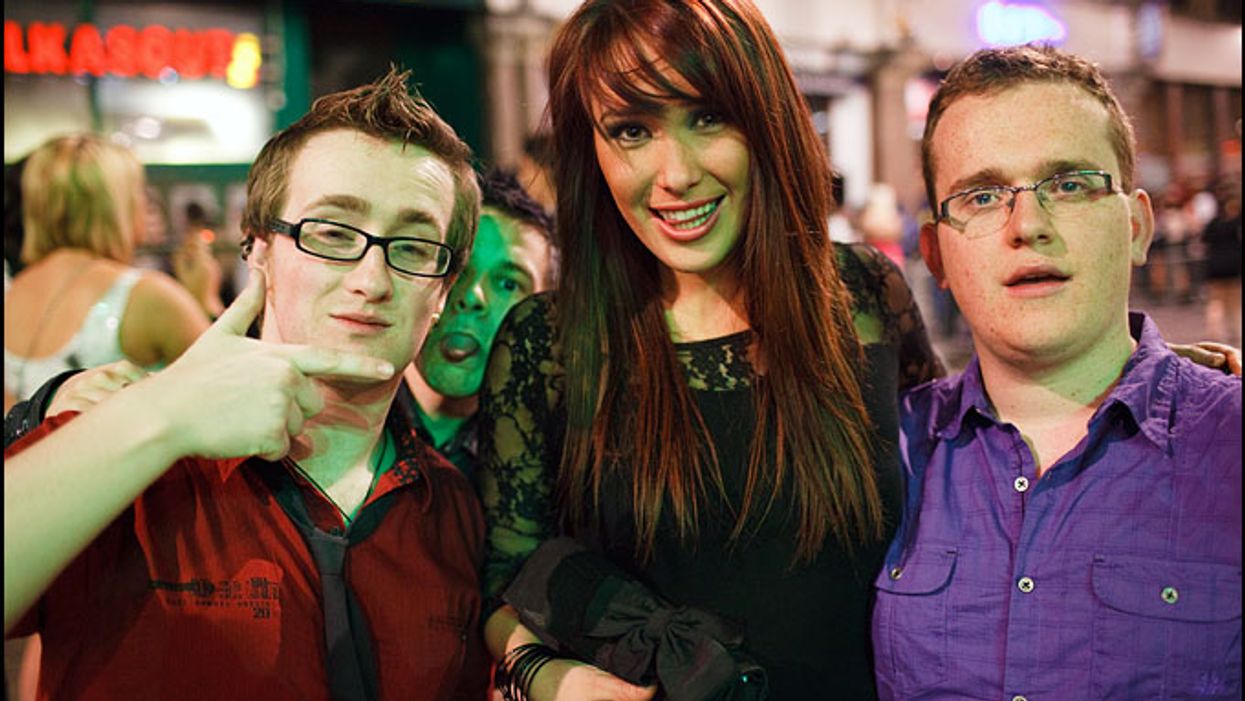 We’ve all met them before, the men who just seem to pulse with a perhaps you should reconsider ever having intercourse with the male species again sort of vibe.

Whether it’s Friday night and you’re out with your ladies, on a first date with a guy your hippy friend Hannah set you up with, or just re-financing your car to get a large, sorry VENTI, coffee at Starbucks, you’ve met him: the socially awkward man who makes you want to mace straight in the creepy psycho killer qu'est-ce que c'est eyes.

He’s on the rebound. He’s a man on a mission and when you ask him where he’s from he thinks its code for let’s practice making babies. It’s not his fault; he’s just left a serious relationship and probably wonders if sex has changed in the past 6 years. (Note: It would be cruel to tell him yes and that barnyard noises were all the rage now) Someone just needs to hand The Eager Beaver a cool glass of water and tell them to take it down a notch. Just dial it down to “politely interested,” no need to keep the sexual tension turned up to “Pee-wee Herman at a junior soccer match.” There’s just no need.

The most controversial of the socially awkward men, because outwardly he has a jawline chiselled from marble and abs that you can wash your laundry on. Like Amy Poehler would say “Yes Please.” But oh, the arrogance. Buddy, you need to check yourself before you wreck yourself. We may be below you on the social ladder of looks, but that doesn’t mean the party in our pants is an open invitation … okay maybe it does! But still! At least pretend like you don’t know how good looking you are.

He’s the drunk man who knows no boundaries and is not afraid to cross yours. You’ll first notice The Beast as he disgustingly licks his lips and walks across the dance floor to compliment you on your skill with the cocktail straw. As he mumbles some degrading comment about your ass, you feel his warm breath and spittle caress your cheek. He’s about as charming as goat with flees. You politely think of any excuse to walk away when suddenly he begins to pass out. No, wait, he’s not falling asleep, he’s leaning in for a kiss! Was it unclear when you told him you weren’t interested/had a boyfriend/were plagued with STI’s/preferred women? No, apparently it was not. The Beast is just a hairpin away from rapey. Hold on to your pepper spray ladies, because this could take a turn.

Such a classic. He's a kind, generous man who still recalls fondly the first pair of boobs he ever saw… at the tender age of 6 months. He'll promise you his mother won’t interfere in your relationship, so long as he calls her 8 times a day and texts her every hour. But who's he kidding, we know she’ll still find a way to come over and invade your personal space. Oh, you didn’t know you were a sub-par cook? Don’t worry, she’ll tell you. Just try not to dwell on the fact that his browsing history hints at some Oedipal tendencies. I mean, at least she gets those tricky (and not so mysterious) stains out of his underwear when she does his laundry. I guess it’s all about the balance.

It’s possible he has just never interacted with the female species before or maybe in World of Warcraft women really went for the pale, gangly type. But here on land women prefer men who don’t look like a sad, sallow version of Gollum. It’s not that we don’t like you; it’s just that you look like you crawled your way out of a Criminal Minds episode and know exactly how to dispose of a body. And stop asking us weird questions because you aren’t sure what to say! It’s better to just stay silent than ask about our Kegel habits. No. Just, no.

That nerdy guy from your Intro to Physics class whose idea of dirty talk is discussing the validity of the Higgs boson. If your pickup line is plagiarized from a peer reviewed journal then just get ready for some backstroke roulette now because this ain’t happening. It’s not your intelligence that freaks us out; it’s that lusty look you get in your eyes when the word quantum or Hawking is mentioned. Take a hike Sheldon, there is a time and a place for science and that place is not the bedroom. Or, to put it in your terms, there is an inverse relationship between my libido and your ability to recite every element on the periodic table.

You’ll find him at the gym; he’ll be the one in front of the mirror making labour noises. Someone should probably tell him he sounds like a woman at 10 centimetres with an 11 pound baby. Are these noises conducive to muscle mass? Should I also be grunting like a fallen pig when I work out? Because I think that would make my yoga teacher very uncomfortable. The Beefeater has arms that look like they've been stuffed with Yukon potatoes. He didn’t think a 6 pack was enough and went for the full 24. He would be somewhat attractive if A) the steroid use didn’t give him a strange green glow and B) it wasn’t so bone chillingly obvious that he could snap your neck like a no. 2 pencil. It’s just a wonder he is still able to stand upright with those needle thin legs…

There’s always one lurking in the crowd. With no discernable physical features The 50 Shades Man can only reveal himself. It might be subtle, the way he asks you if you have any sexual fantasies, or perhaps he just reaches for his industrial chain whilst in the act, either way if that’s not your cup of tea The 50 Shades man will make you cringe and reconsider dating for a while (if he ever unties you and lets you out of his Red Room). Or maybe he prefers to be the submissive and your independence appeals to him in primal sort of way. That’s fine; we’ve all been waiting for a reason to break out our studded La Senza whip that we bought on liquidation. But can we all just agree that no one is peeing on anyone? At least not on the first date.

What Montreal girl is not familiar with this socially inept man? He usually announces his presence with an overly drawn out dammmnnn girrrlll before moving onto something more lewd, typically a reference to the butt, boobs, or legs, or (if you’re lucky) all three. He has a talent for finding the perfect word combination to make your body feel on display and disturbed. With his pervy eyes molesting you all over you’ll wonder why you ever decided to leave the house in the first place. Are toilet paper and your grandma’s prescription heart medication really that important? How would you like it if every time you walked by we told you we could "take you in the back alley and make you see Jesus?” Okay, don’t answer that.

What list of socially awkward men in Montreal would be complete without mentioning the boy with the $200 “messy” haircut who listens to indie music and wears your grandfather’s hand-me-downs? Maybe it’s the hand knitted scarf, or the ironic way he drinks his caffeine free latte. Maybe it’s the similarity to Bruce Jenner, or the way he wears his shoes one size too small. There’s just something about The Hipster that’s off. Like when people walk away from an erupting flash mob, it’s not that we don’t see you, it’s just that we really don’t care.