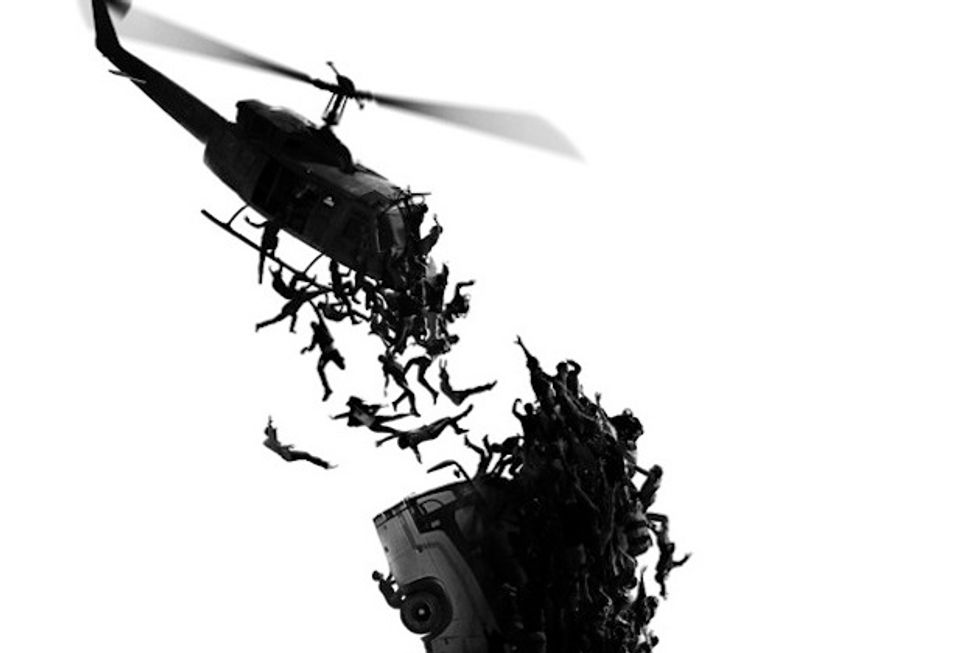 Zombie movies are a dime a dozen these days, with a few coming out in mainstream cinema almost annually. World War Z does some things differently but many things the generic zombie-flick way.

World War Z centers on ex-guerilla journalist Gerry Lane (Brad Pitt), leaving behind his family on a UN battleship, in search of a cure after a zombie outbreak wreaks havoc on the entire planet. The opening scene where the infection first spreads is pretty fucking awesome. The tight, low camera angles in downtown Philly really makes for a more intense scene.

Actually all the action scenes are  crazy, with everything from big scale explosions, grenades on planes, and exploding helicopters. There were  a few quick fright scenes where a zombie would jump out of nowhere and damn it did I crap my pants just a wee bit.

The zombies, both running in massive hordes when together or shambling slowly when alone, were an interesting bunch.  The film’s take on the "cure" for the zombie virus is also something not explored in mainstream zombie movies, and was an interesting addition to the genre.

One thing that really bugged the hell out of me though was the pacing. Within one hour of the infection hitting, Pitt’s on-screen family seems to have survival in a post apocalyptic world down to a tee. One second Gerry (Pitt) is in Philly, the next on a Battleship near Bermuda, then in North Korea. Without any indication of time, it seemes like it all happens within a day. Overall though, there were no slow transitions allowing for character development or for the audience to care for these characters beyond our instinctive desire for survival.

Something I though was pretty great though was that everyone in the film addressed the “infected” as zombies. Few films do this, and I think it adds a element that’s both fun, yet at the same time kills some of the story’s realism. The obvious lack of blood and gore (due to the film's PG-13 rating), kind of took away from what makes a zombie movie.

The last big scene in a Cardiff laboratory is a bit of a zombiephile’s wet dream. Pitt and two of his co-stars need to get into a part of the lab overrun with zombies, armed with an axe, a baseball bat, and a crowbar. Classic zombie flick sexiness.

The ending was rather anticlimactic, but World War Z is really one of those movies you turn your brain off to, and just go along for the ride. While the screenplay and acting wont be foreseeably winning awards any time soon, it makes for a great action movie with a few scares along the way that any zombie fanatic will enjoy.