Zombies Invade Montreal What Do You Do? Hide In These Locations

Be prepared and don't get dead when the zombies come.
Alex Melki 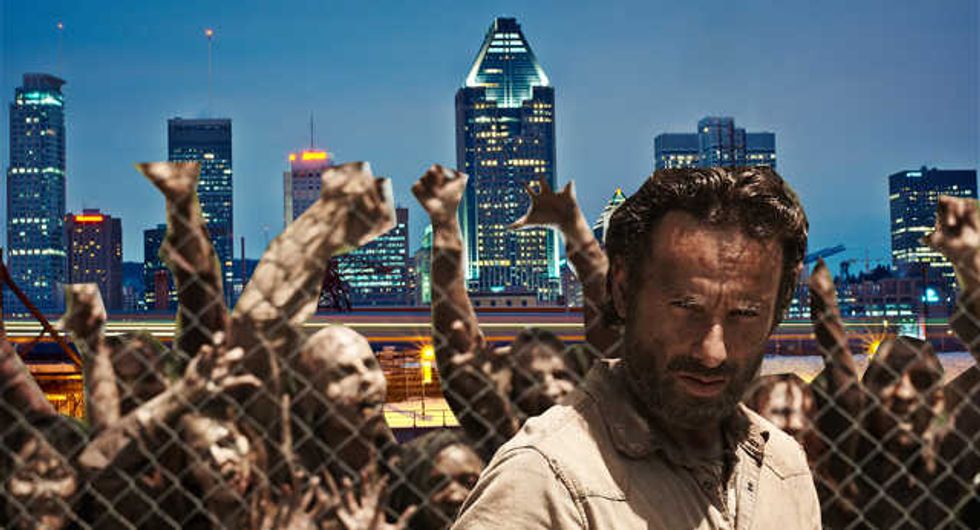 Between the recent floods in NYC, meteors in Russia, and Miley Cyrus, a zombie apocalypse is most likely just around the corner. Most zombie flicks take place in the US, and that's fine and dandy, but we live in Montreal. So where in Montreal should you go to give yourself the best chance at surviving the inevitable zombie apocalypse?

AKA Saint Hellen's Island for the Anglos. This man-made island is cut off from the metropolitan madhouse that will be overrun with flesh-eating walkers in the early days of the zombie apocalypse. Refuge here will be either amazing, or annoying. Amazing if the apocalypse occurs October through April. But May through September means you'll have your hands full with an abundance of tourists/Montrealers visiting Parc Jean-Drapeau and LaRonde. Zombified or not, this could be an issue. But there's lots of forestry to hide in as the world off the island rips itself apart.

The top of Mount Royal

For this one you'll have to scavenge for canned food and weapons before you get to your destination, cause there's nothing up at the peak of the mountain. Live off the land, climb trees, and learn how to use a crossbow. Your survival skills will be put to the test as you'll need to build your own shelter, but you'll be far away from the zombie hordes as they roam the snack-filled streets of downtown Montreal. And don't forget that uninfected people are just as much your enemy during these trying times. Being hidden away from other humans will also work to your advantage. You better be a full-blown survivalist come winter, otherwise you best find yourself another location soon.

Now I know what you're thinking, "A hospital during a virus outbreak, ARE YOU MAD MAN!?" Hold the phone. The Super Hospital is still being built. That means that it is going to be empty. The place is absolutely massive, hell, it's a miniature city. And because of how vast the construction site is, you won't have to deal with anything more than the odd stray zombie. The whole place doesn't have electricity, but lights will only attract zombies, or even worse, other humans. And don't forget the off chance that a few medical supplies may have already been loaded into the place. You can board off a floor or a wing, sneaking out once in a while for supplies. Play it safe and you might just make it through this thing!

The Port of Montreal

The port is an ideal haven from zombies for several reasons. First, it already has a fence around it. It's lightly defended, assuming you'll have to deal with enemies of the human variety. And if they've "turned", a few undead dockworkers won't be too much trouble to deal with. Once you've secured the place you've got a fuck-ton of supplies. It only needs to be defended from 3 sides, since one side is facing water. And thinking long term here, you could always learn to operate the crane and sort through the many containers for food if your supply ever runs out! And if you ever need a quick getaway, jump on a boat a ditch the port!

Let's face it, a mall is the last place you want to be when the dead begin to rise, but COSTCO ain't no mall. It's a warehouse with a lifetime of supplies! You've got everything from canned food and mattresses to chainsaws and knives. Don't feel like altering your lifestyle too much after the apocalypse? Well rev up a generator and watch The Walking Dead while you down some Pizza Pockets and Pogos. It'll take a group of you to get this massive place locked down safe enough to stay there. and you may have to deal with some dickish survivors trying to rob you of your fortress, but it's doable!

Now this will be years after the outbreak and will require massive military intervention, but if the world falls to shit, Montreal will have to fend for itself. If it comes to this, and you survive long enough, you'll start banding together with other survivors. Eventually we'll start a microcosm of zombie-hating Montrealers led by some form of military. We'll attempt to wall ourselves in from the outside world. Giant walls will be erected, buildings will be swept through and zombies exterminated, and a quarantined zone will be created. Politics will likely be reinforced in this new post-apocalyptic community and we all know how that goes in Montreal! Also, knowing the reliability of construction work in Montreal, you might be safer outside the walls.

Did we miss something? Thing we're wrong? Let us know in the comments bellow! And for fuck's sake, stay out of the metro!