You can grab a bite and sit in the sand! 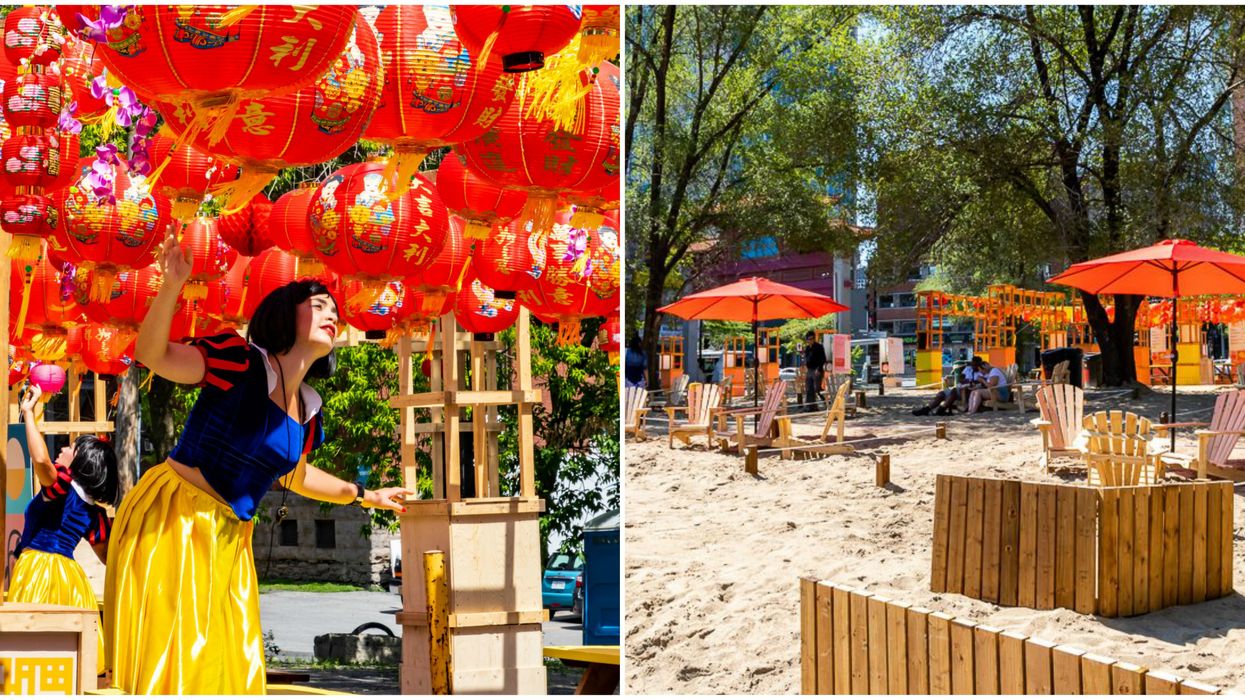 Like other neighbourhoods downtown, Montreal's Chinatown has had a rough summer. Once bustling with people looking to eat its iconic dragon's beard candy or slurp bowls of steaming-hot pho, its streets have been eerily silent for the last few months as the pandemic has kept the crowds away. Then on Friday, at the corner of boulevards Saint-Laurent and René-Lévesque, a new public terrasse called Shā Tān appeared, complete with an urban beach where you can eat a meal from nearby restaurants while enjoying camaraderie in the sand.

Designed by local architects and decorated in coloured lanterns, garlands, and flowers, the terrasse is both a socially distanced dry-beach right in the heart of the city and a tribute to the storied neighbourhood.

Editor's Choice: 8 Actually Fun Socially-Distant Things You Have To Do In Montreal Before Summer Is Over

Shā Tān is one of seven public terrasses that have been set up around the city to offer people safe and lovely places to hang out, he said.

"Businesses and restaurants are struggling all around downtown," said Carignan. "So, we wanted to bring a little bit of magic to some of these neighbourhoods to attract people in this crazy time."

It's all part of the "Plan de relance du centre-ville," an initiative to help downtown businesses battered by the pandemic with new public spaces and cultural activities.

Mayor Valérie Plante allocated $400,000 for the initiative on July 21.

"The unprecedented crisis we are navigating presents significant challenges on multiple fronts. One of them is the survival of downtown Montreal, an important district whose economic vitality has ripple effects throughout Quebec," she said in a statement.

"Normally a very lively, animated, festive and diverse place, the area has been almost entirely deserted by the millions of tourists, workers and students who spend time here each year," she continued.

In addition to the specially designed terrasses, about 200 surprise performances will be presented by more than 150 artists in different locations around the city.

The whole initiative runs until the fall.