Shina Nova and Ky Flaherty are spreading awareness about food poverty in Canada. 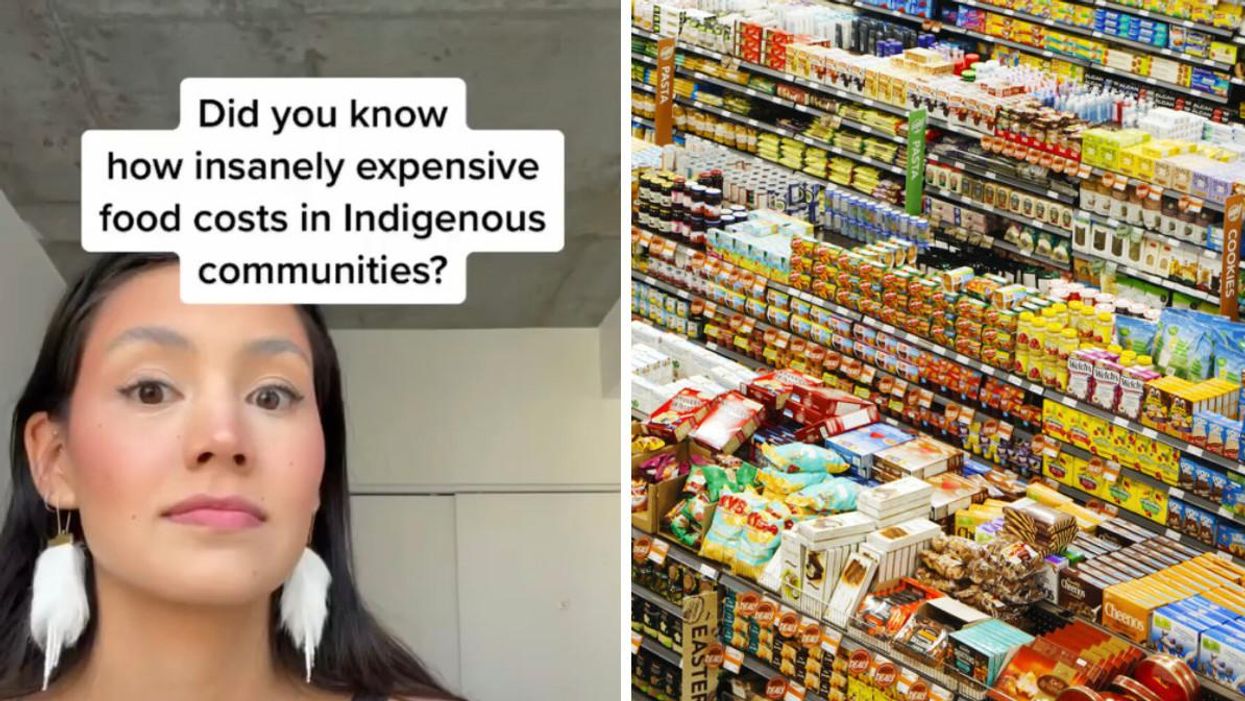 When shopping for groceries, it doesn't always cross our mind just how expensive the same products can be in different parts of our country — but Inuuk TikTokers, @shinanova and @arcticmakeup, are using their platforms to shine a light on the stark food prices differences in Canada in places like Montreal and Ottawa versus places like Nunavut.

In a viral TikTok, Shina Nova shared photos of food prices in Indigenous communities in the country. We see things like a pack of grapes being sold for $28.19 and ketchup costing $16.79.

In the most recent Statistics Canada food price survey for Nunavut, from 2018, we can see the price difference between food products in Nunavut vs. Ottawa.

Videos by Ky Flaherty (@arcticmakeup) on TikTok go even further to show that it's not just food prices that are noticeably higher in Nunavut, but household products too.

Flaherty shows a photo of Kirkland diapers costing $53.79 in Iqaluit and $37.99 on Costco's website.

In an interview with MacLean's, Flaherty explained that she creates these TikTok videos to bring to light the need for affordable food in Canada's North, which she referred to as "suicide prevention."

"There's no possible way for anyone to thrive in life when they can't even get their next meal. Food is a basic necessity and if you can't get that, there's no way for you to truly be okay," Flaherty said.

Both Shina Nova and Ky Flaherty have been able to spread awareness of the food disparities that exist in Canada by reaching millions on TikTok.

Canada Is Officially More Bilingual Than Ever Before

French-and-English speakers are on the rise.
Wikimedia Commons

Canada’s two official languages, English and French, are known by more Canadians now than ever before, according to data recently published by Statistics Canada.

Montreal Ranked “Safest” City In Canada You Can Live In

A place that gives you peace of mind and a sense of calm.
alexrykov_

Okay, brief show of hands. Who here thinks Montreal is safe AF? If your hand isn't raised, no worries.

According to a Global News article, a study was recently conducted by Mainstreet/Postmedia to see how safe people perceived different Canadian cities.

Toronto and Vancouver ranked dead last of all Canadian cities

It's official: a new report released by Statistics Canada Monday suggests Montreal's got a leg up in terms of life satisfaction. It would appear as though all the bike paths and lactose-free lattes in the world aren’t enough to bring smiles to VanCity. In the first Canadian report of its kind, it turns out holier-than-thou Vancouver – the jewel of Western Canada – has the most miserable people in the whole country, even worse than Winterpeg and Hamilton. Meanwhile, Toronto slash T-dot slash centre of the universe slash Drake, was rated second last.

According to the study, the three happiest places in Canada are Sagueney QC, Trois-Rivieres QC and St. John’s NL.

The Pros And Cons Of A Water-Bottle Free Montreal

San Francisco has just become the first major North American city to ban the sale of single-use water bottles on all public property and city-sanctioned events.

Should Montreal do the same?

The movement to ban water bottles in SF is largely inspired by the environmental damage caused by the packaged water industry. 17 million barrels of crude oil are used to make the 29 billion water bottles sold in the U.S. (a majority imported from Canada), and only 13% of the 29 billion are actually recycled.