Here’s what you need to know about this crappy invasive species. 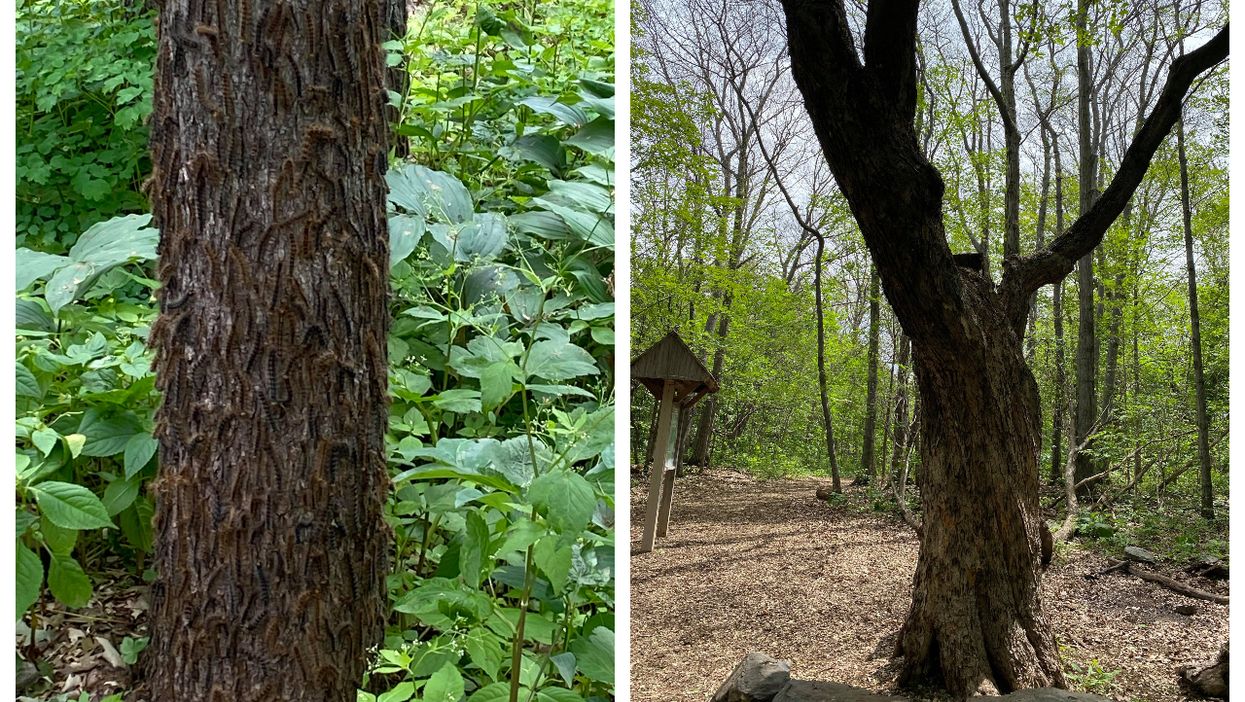 Gabriella Kogan says she "won't be heading up there any time soon."

The Montreal resident and her children were recently exploring Westmount's Summit Woods when they "realized most, if not all of the trees were carpeted with a fuzzy layer of caterpillars!"

Editor's Choice: These Are The 15 Highest Paid Habs Players This Season

"These were not cute storybook Eric Carle's 'hungry caterpillar' but rather something out of a horror movie," she said. "One or two would be sweet but to see each tree coated with these critters made us uneasy."

Experts told MTL Blog the bugs are most likely LDD moth (Lymantria dispar dispar) caterpillars, an invasive species that has been defoliating trees and pooping everywhere across Quebec, Ontario and the northeastern United States this year.

Quebec is dealing with a moth invasion

The moths, commonly known as "gypsy moths," were first brought to North America in 1869 by French artist Étienne Trouvelot, according to an online resource from the University of Wisconsin.

Without "many natural enemies," the moths were able to expand beyond Trouvelot's suburban Boston backyard to become "one of the most important insect pests of forest and shade trees in the eastern United States," the university explains.

McGill university insect pathologist Dr. Gary Dunphy told MTL Blog that, due to the natural ebb and flow of the population, LDD moth outbreaks occur every seven to 10 years.

Their poop rains from above

Last year in Ontario, the creepy crawlies munched across 586,385 hectares — more than twice the recorded defoliation of the previous year.

They like trees such as oak, white pine, white spruce and birch, according to a fact sheet from the Invasive Species Centre.

Also, the caterpillars' tiny bodies are covered in hairs, called setae, which can cause a rash "somewhat like poison ivy," in some people, though it can be treated with antihistamines and over-the-counter medication, said Dunphy.

"The setae or hairs of the insets may elicit rashes several months after the larvae are gone, the hairs being entrapped in tree bark," he said.

They also poop everywhere and their feces, known as frass, makes an audible sound as it falls like rain, covering outdoor furniture, clothes and hair.

The moth problem will take care of itself

Like all LDD moth outbreaks, this year's problem will take care of itself as fungal and viral infections reduce their population, entomologist Gard Otis told MTL Blog.

"But we don't know what next year will bring," he said. "We don't know if the virus is going to sweep through this year and kill them. Or if we're going to have another high number next year before the virus takes them down."

Some communities spray a bacterial insecticide called BTK to control the pests, which "though totally harmless to your pets, to your children, and to yourself," can harm the food chain as it kills all moth and butterfly species.

"That's the insects that provide all the food for your little baby birds," said Otis. "Most of the songbirds here are feeding their young with caterpillars. So, what are they going to feed on?"

He said a more environmentally-friendly defence involves wrapping a burlap sack around the trunk of any tree in need of protection.

"What happens is the caterpillars crawl down out of the tree and rest on the trunk in the daytime. And they like to hide so they hide in the burlap and then you just shake them off into soapy water and that kills him," said Otis.

"So, if you have a few trees that you're worried about, you could do that and cut the infestation back to the point where it's not going to seriously harm them."

As for the caterpillars' long-term effect on the trees, themselves, Otis suggested that repeated visits can cause some damage.

"You have too many gypsy moths for too many years, a few trees will die, but most of them will bounce back."

The map's creators say at least 80% of police stops aren't recorded by the SPVM.

The STOPMTL map was created by a team of researchers at the Institut national de la recherche scientifique (INRS), McGill University, Concordia University and University College London. According to a news release by INRS, the project aims to gather crowdsourced data on police stops in Montreal in an effort to fill gaps in existing data.

Live sports have played a massive role in helping our city come back to life again. And photos of just how packed Montreal's Little Italy was during the Euro 2020 final proves that.

On July 11, it came down to England vs. Italy in the series, which explains why Little Italy was so bumping.

Thanks to a combination of hockey, careful planning and MTL Blog, Josiah McCooeye was able to totally surprise his now-fiancée, Taylor Sparkes, with a marriage proposal.

"I had been planning to propose for a while but did not know exactly how I would do it," McCooeye told MTL Blog. "Then I had an idea."