Is this fruity gin made with blackberries and raspberries worth trying this summer? 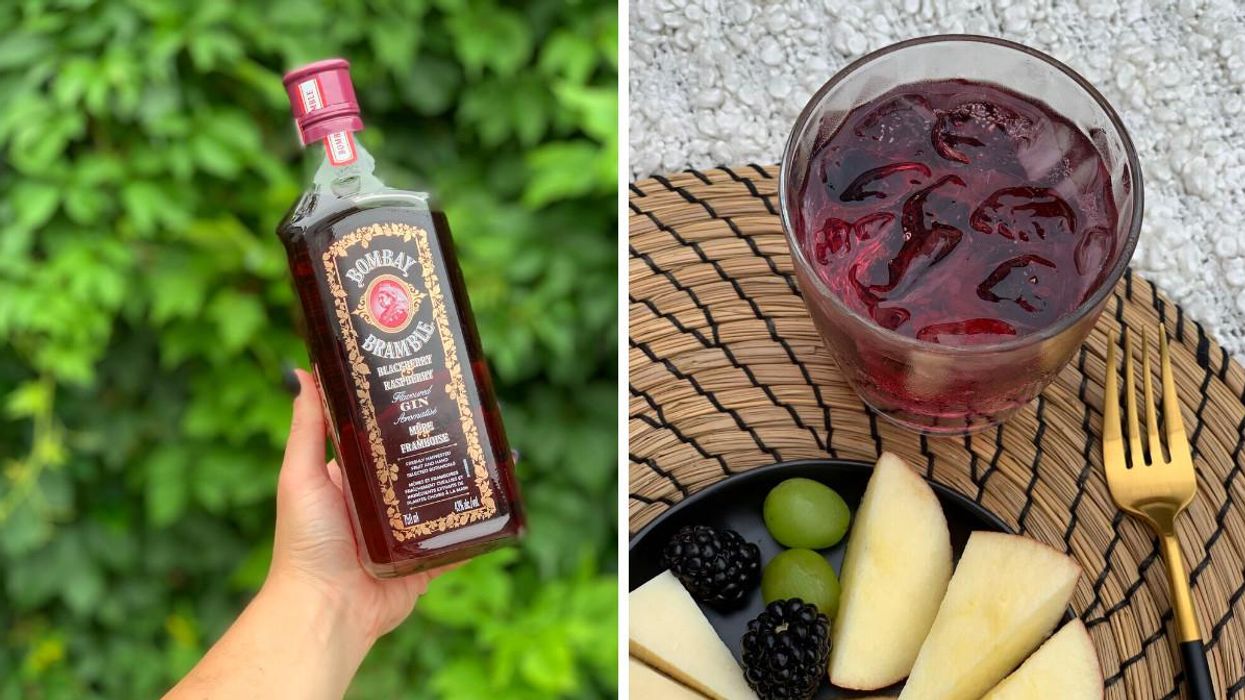 For countless years, well-known spirits brand, Bombay Sapphire, has taken even the pickiest gin lovers on a delightful taste and sensory journey.

Recently, they set their sights on creating a diverse range of premium gins, the newest addition to which is Bombay Bramble — an eye-catching, crimson-coloured gin created with 100% natural fruit flavours.

Rather than using artificial flavours, colours and added sugar after distillation, Bombay Bramble is instead made with freshly harvested blackberries and raspberries for a rich fruit infusion and a bold new gin.

A versatile, ruby-hued gin with fruity summer flavours obviously sounds delicious, but does it live up to the hype? I decided to try Bombay Bramble for myself and share my thoughts.

First up, it's good to know that a 750 ml bottle of Bombay Bramble is widely available around Montreal. You can get it at the SAQ for $29.95, and it has an alcohol level of 43%.

I decided to try it by itself over ice first so that I could taste all of its subtle flavours. After my first sip, I noticed how dry Bombay Bramble is compared to the overly sweet (in my opinion) flavoured gins I'm used to. So on that front, I was pleasantly surprised.

As for its aroma, Bombay Bramble smells quite strongly of blackberries and raspberries, with subtle notes of juniper berry, coriander and a hint of lemon zest. The natural botanicals are expertly captured, giving this well-balanced gin a fresh, crisp taste.

Although gin isn't usually my go-to spirit when choosing a summer drink, I have to admit that I love this new take.

Whether you like a simple mixed drink or prefer to shake things up with a creative and tasty cocktail, as long as you like fruity flavours, Bombay Sapphire's new berry-infused gin won't disappoint.

If your bartending skills are a bit rusty, try mixing up a Bramble and Tonic to start; it's a simple recipe that I really enjoyed.

This blackberry/raspberry gin is sure to make an appearance on my drinks rotation this summer and will definitely add a unique twist to my next sangria.

Where: Available at the SAQ and select retailers

Details: This new fruit-infused gin from the makers of Bombay Sapphire makes a delicious substitute for regular gin in your favourite cocktails.

Narcity does not condone the overconsumption of alcohol. If you are going to drink alcohol, please do so responsibly and only if you're of legal age.

This article was originally published in French on Narcity Quebec.

Although products were provided for free in this review, the author's opinions are genuine and do not reflect the views of Narcity Media.

These Are All The Spots You Need To Visit Near Montreal, According To Virgin Radio's Vinny

All less than three hours from Montreal.

Staycations are where it's at 2021, and Quebec — with its rolling hills, beautiful lakes and endless drives — is a wonderful place to go exploring near to home. As Canada's largest province, it's chock-full of memories just waiting to be made.

Quebec offers an abundance of both history and nature, from its townships brimming with European charm to its vast provincial parks. You can fly, train or bus to many of Quebec's must-see destinations, but the best way to explore this far-reaching province is by car.

Anyone who has pets will know that they're more than just a four-legged roommate — they're loyal companions.

Furry friends are there to comfort you, help you cope with life's ups and downs, make you laugh and ensure you're never without company. Dr. Rebecca De Arburn Parent knows this to be true. Her two adopted pets, Barbie and Fugueuse, help make her house a home.

7 Money-Managing Tips Every Millennial Should Know, According To A Canadian Banking Professional

Stay smart with your money.

Knowing how to manage your money can be tough. Personal finance isn't something that's typically taught in schools, and if you don't have a financially savvy person in your life, you might be left to figure it out on your own.

To help you learn more about money management and how to get more value from the things you do every day, Narcity got in touch with Erica Nielsen, Senior Vice President of Everyday Banking and Client Growth at RBC.

They spoke about tips to help you manage your money, and the launch of RBC Vantage — which gives you access to a comprehensive suite of benefits, interactive tools, rewards and savings available simply by having an RBC bank account.

After months of work, the new District Gourmand — a chic, modern space in the West Island— is finally ready for you to explore at CF Fairview Pointe Claire.