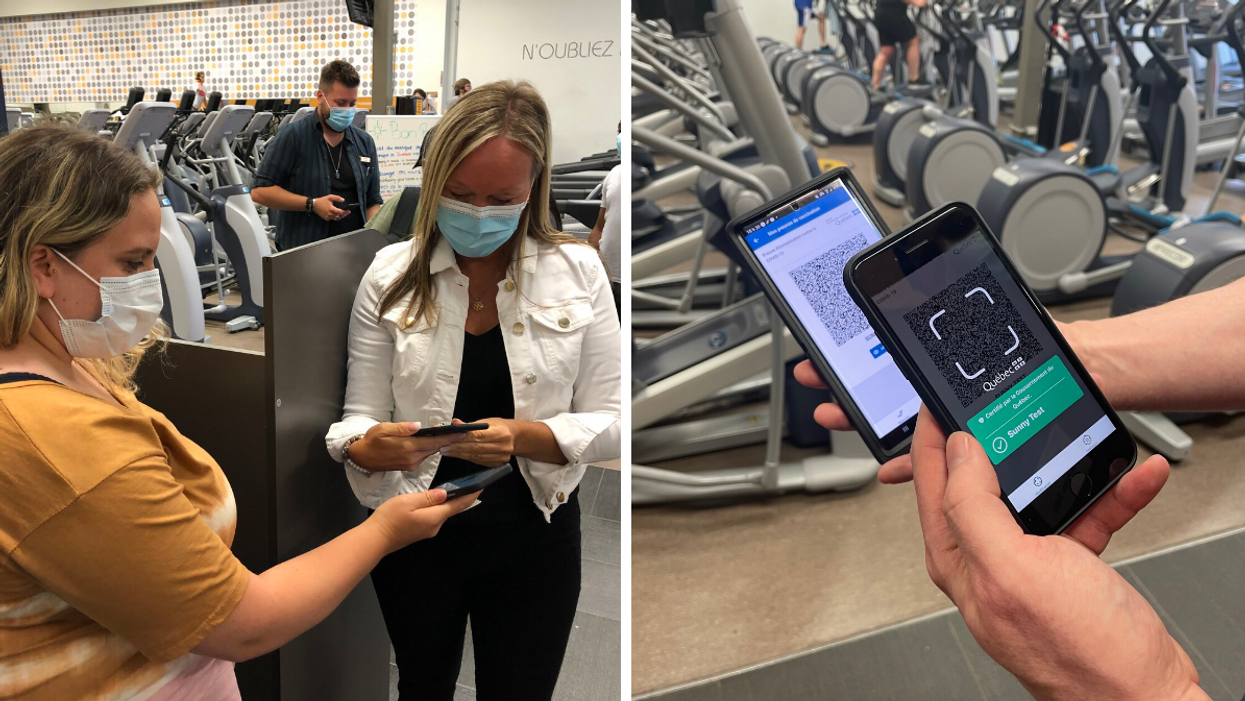 Love it or hate it, Quebec is planning to implement a COVID-19 vaccine passport system on September 1. While questions remain, like how the passport will work for out-of-province tourists, other details are coming to light, as the Quebec government releases more information and runs pilot projects.

I headed to a gym in Laval where one of the pilot projects was taking place on August 17. I got a first look at the province's vaccine passport system and even tested it out myself.

As I pulled up to ÉconoFitness Laval - Vimont, I noticed a group of anti-vaccine-passport protesters in the parking lot. The demonstration began at 3 p.m. so the crowd had died down by 6 p.m., containing far fewer than the 250 people reported by Journal de Montréal.

Multiple protesters still donned yellow stars, a symbol of the Holocaust, and one person held a sign that read, "It's not Auschwitz, it's Quebec." However, protesters did not block entry to the gym and clients were able to access their workouts freely.

Since I couldn't find the proof of vaccination QR code the government sent me after my doses, I re-downloaded it on Quebec.ca earlier in the day and saved a screenshot to my phone.

Upon passing through a turnstile at the entrance to the gym, I was greeted by an ÉconoFitness staff member who asked to see my QR code. She scanned it with the government's app, which she had on her phone, and a green checkmark appeared. The only information visible on her phone was my full name and the words "Certifié par le Gouvernement du Québec."

If your credential is not accepted, a red box pops up instead of a green one and there's a warning symbol instead of a checkmark.

"It was super simple, nothing against it," an ÉconoFitness member said to me, as he entered the gym.

According to Renaud Beaudry, Éconofitness vice-president, that was the general sentiment throughout the trial period, which ran from 3 p.m. to 8 p.m.

"So far it's going well. The application is very easy to use so it's user-friendly. The staff is understanding it very well [...] Most of [the members] had their QR codes ready for the test and — same thing for them — it was easy and user-friendly," Beaudry said. "The good news is we can keep the gyms open."

Alexander Dahl, whose technology company partnered with the government to create apps for this project, explained that the government will be releasing two apps: one for businesses and the other for individuals. The app for individuals is wallet-style so people can store multiple QR codes in one spot — useful, for example, for families.

But you can simply show your QR code or paper proof of vaccination if that's what you'd prefer.

Dahl said all data is encoded in the QR code and the apps do not connect to the internet.* No data is stored on the business user's device. He also said "Certifié par le Gouvernement du Québec" has the potential to change to certifications from other jurisdictions, potentially accommodating tourists.