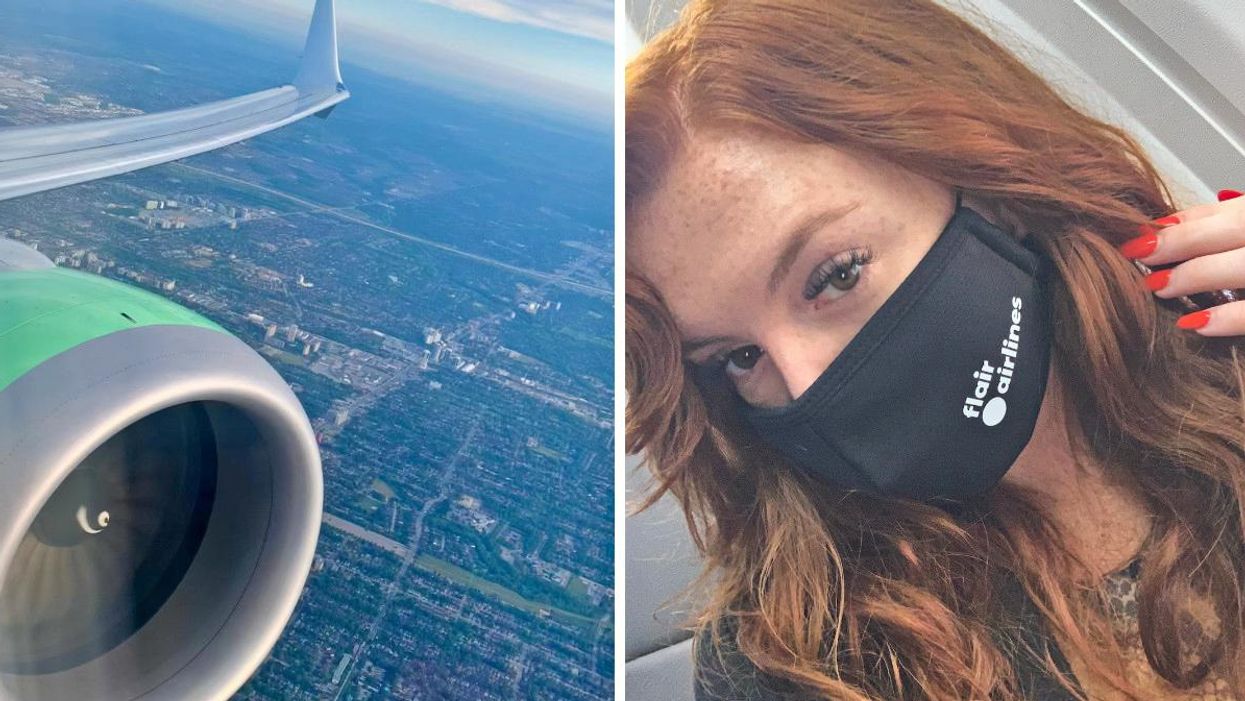 Flights are ultra-cheap compared to other airlines

Let's face it, going on a trip sounds awesome until you realize just how expensive flights can be. But luckily, Flair Airlines "[believes] Canadians have been paying too much for too long" and decided to make travelling across the country and to certain American cities way cheaper than some other airlines.

If you're flying from Montreal (YUL), you have the choice between the Canadian destinations of Toronto (YYZ), Vancouver (YVR), Abbotsford (YXX), Halifax (YHZ) and American destinations of Fort Lauderdale (FLL), and Orlando (SFB).

Genie Bouchard was on the flight

When I showed up, tennis player Genie Bouchard was at the gate modelling Flair's new grey, green and purple uniforms. So she got to look like a flight attendant for the day.

Bouchard is an ambassador for the new airline and she claimed to love what it represents. When speaking to the passengers on the flight, she said she loves that Flair "disrupts the Canadian airline industry."

"I think travel is amazing and we want you guys to be able to travel across Canada at low prices and see family and friends in our beautiful country," she continued.

In regards to the real flight attendants on the plane, they were nothing but nice.

I also got the chance the meet the CEO of Flair Airlines, Stephen Jones, on the flight, who said "I'm so proud to have this flight going today, you wouldn't believe the amount of work that's gone on in the last nine months" and then continued to thank everyone on the flight for flying with Flair.

Overall, every single staff member I met was kind and helpful.

Make sure to pack light

When boarding a Flair flight, every passenger is allowed one personal bag for free. But, unless you're flying for a quick business trip, you'll likely be bringing at least a carry-on with you, which is an extra $39-59 plus tax if you add the baggage option while booking your flight on the airline's website.

The moral of the story: the lighter you pack, the more money you save! Plus it's always helpful to have the least amount of stuff to trek along with you while you're on your trip.

Time to start planning your 2022 adventures.

If you've been dreaming of visiting British Columbia for some time now, know that you can take a round-trip flight from Montreal to Vancouver for $122 in February 2022 and it's the perfect opportunity to plan a ski trip to Western Canada.

With Flair Airlines, you can fly across the country for the same price as a nice dinner out.

You Can Now Fly From Montreal To London For $75

After years of scanning the internet for flight deals, I've pretty much seen every kind of deal you could imagine.

But this next one is by far the best one I've seen in months.

You Can Now Travel From Montreal To Europe For Free

It'll be the best summer of your life!
Viacheslav Lopatin

Have you ever wanted to travel to Europe? Of course you do, the only problem is that you're too damn broke!

Well as it turns out, you can travel to Europe for free!

Enjoy a daydream or two on us.
Markus Jöbstl

Despite its number of flaws, this city offers a whole lot of cool events and festivals, beautiful architecture, one-of-a-kind culture, and probably the best place to call home. That said, it's sometimes nice to get away.

Escaping the familiar and discovering wondrous far-off places is not only a great way to get over the end of summer blues, but it's also good for the soul. Especially when it includes a sunny beach and cheap booze, amirite?